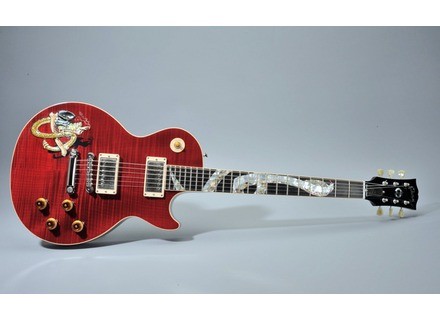 Gibson Slash Les Paul Snakepit
4
Afficher la traduction automatique
Afficher l'avis original
Slash has been a long time user of Les Paul guitars for awhile. While he has a signature model, this one is more of an anniversary guitar. The guitar features a mahogany body with a maple top, mahogany neck with an ebony fretboard, 22 frets, extremely unique snake inlay with a snake graphic on the body, no pickguard, binding, hard tail bridge, two humbuckers, two volumes, two tones and a three way switch.

The guitar was put together very nicely. The inlay work was top notch, and considering how many mistakes that can be made on something like this, that's a pretty big achievement. The figured top wasn't too eye popping, but it wasn't bad either. The fretwork on this model was very nice, but there were some grooves in it due to fretwear. This is a discontinued guitar, and we had it for sale in the used bin, so that's somewhat expected on something like this. Aside from that, the guitar is pretty much your standard Les Paul but at a much higher price.

Normally, Gibson Les Pauls are very thick sounding. This works great for most styles of music, but sometimes it lacks a tad bit of clarity for genres such as metal, especially once you start tuning lower. The ebony fretboard on this guitar helps add some sizzle and bite that allows the guitar to cut through the mix without sounding thin. I'm not a fan of the pickups, so I always replace both those and the pots. This really opens up the guitar and makes it not only more aggressive but more versatile as well.

The inlays on this thing are just to gaudy for me. Even the little gimmick graphic on the body is a bit much. That said, the guitar played nicely. It didn't have any tuning issues, despite it being a used guitar. It also didn't have any real fretwork issues aside from the basic grooves that occur from it being played. If you're on the market for one of these, be prepared to spend a good bit of money as these aren't the cheapest Les Pauls that Gibson made...
Slash a été un utilisateur de longue date de Les Paul guitares pendant un certain temps. Bien qu'il ait un modèle signature, celle-ci est plus d'une guitare anniversaire. La guitare possède un corps en acajou avec une table en érable, manche en acajou avec un manche en ébène, 22 frettes, incrustations de serpent extrêmement unique avec un serpent graphique sur le corps, pas de pickguard, la reliure, le pont arrière dur, deux humbuckers, deux volumes, deux tonalités et un commutateur à trois voies.