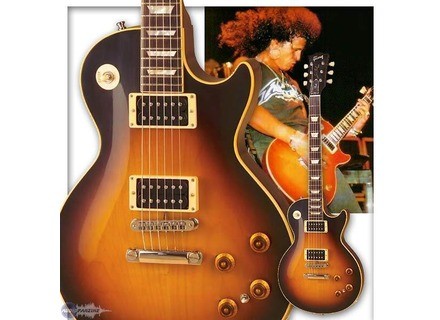 Gibson Slash Les Paul
4
Afficher la traduction automatique
Afficher l'avis original
This is really just a standard Les Paul with a few slight tweaks to make it Slash's own personal signature guitar. The guitar has a mahogany body with a maple top, a mahogany neck with a rosewood fretboard, 22 frets, trapezoid inlays, two humbuckers, no pickguard, three volumes, one tone control, a special Fishman powerbridge with a mini toggle switch and a three way switch.

The coolest feature on this guitar is the Fishman Powerbridge. I'm pretty sure that's why everyone gets this. For those that don't know, the Fishman Powerbridge is a normal bridge, but it had piezos built into it. That allows you to get that electrified acoustic sound going on. I think the John Petrucci EBMM is the most popular model to have this feature, so if you've ever heard his live stuff, you've heard the piezo. The fretwork on this model was good, and the nut was properly cut. Everything else was pretty much on par with normal Gibson standards.

The humbuckers in this guitar weren't too bad. They had that PAF tone going on, and they got that signature overdriven sound once you start using this with a Marshall amp. The bridge is bright but powerful. I was able to play everything from AC/DC to 80s metal with it. The neck had that signature kind of Slash tone going on. I prefer something a bit thicker with more output, but that's me. The piezo added a really unique blend of tones once you started messing with it. I was able to switch between acoustic sounds and overdriven sounds without too much of an issue. It definitely adds another dimension from the standard Les Paul.