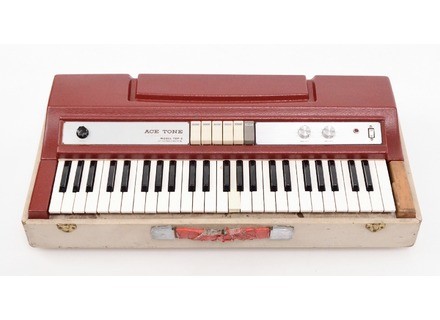 Ace Tone Top-5
5
Afficher la traduction automatique
Afficher l'avis original
The Ace Tone Top 5 is a compact combo organ that is similar to the organs made by Farfisa. It's got about three and a half octaves of keys, and stands on a set of legs that come on it. It's got full polyphony and the sounds can be edited using the preset sound buttons as well as the tone knobs. It doesn't have pitch or modulation wheels and isn't MIDI compatible in any way.

Using the Ace Tone Top 5 is really simple, as there isn't much beyond the presets to play with here. The preset sounds are really enough to get the job done, as each one is pretty unique sounding. Beyond the preset buttons there is a volume knob and a few other knobs, but nothing that isn't self explanatory. A manual isn't necessary for using the Top 5 organ in my opinion.

The sounds that are possible with the Ace Tone Top 5 are definitely vintage sounding to say the least. If you've ever heard a Farfisa organ, which you definitely have even if you don't know it, this is pretty much the same type of thing. It's got the standard cheesy organ sound, which is kind of loungey sounding, as well as a variety of other preset sounds. There is a preset that sounds more square wave like, and others that are varieties on the original organ sound. It's a great organ for getting a quick and easy, cheesy organ sound.

I haven't seen too many Ace Tone Top 5 organs out there beyond the one that I've used, in fact, it's the only one that I've seen at all. The studio that I'm currently working at has one of these, although it hasn't seen too much action in the time that I've been there. I would imagine it gets used every once in a while, but no matter where it is, it isn't the type of organ that will be used all that often. Having said this, for what it is, it is definitely up there with the best sounding compact organs that I've used.
Le Top 5 Ace Tone est un organe combo compact qui est similaire aux organes effectués par Farfisa. Il a environ trois ans et demi octaves de touches, et se tient sur un ensemble de jambes qui viennent sur elle. C'est la polyphonie a obtenu pleine et les sons peuvent être éditées en utilisant les boutons sonores préréglés ainsi que les boutons de tonalité. Il n'a pas de pas ou de roues de modulation et n'est pas compatible MIDI en aucune façon.