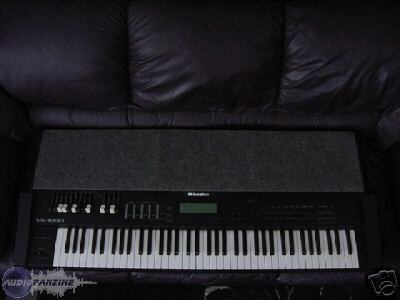 (contenu en anglais)
Afficher la traduction automatique
Afficher l'avis original
The Rhodes VK 1000 organ is a full sized digital keyboard that is mostly known for its organ tones but contains all sorts of keyboard sounds. It has full polyphony and has a ton of different features for controlling different patches and effects.

The configuration of the Rhodes VK 1000 isn't too complicated, but there are a lot of features and it did take me a little while to get used to the keyboard as a whole. On the right side it has a series of buttons for controlling your sound, while the left side contains a number of draw bars that can be used with any of the sound patches, not just the organ. It also has a digital screen which will display everything you needed to know about editing the sounds. I don't have the manual for the Rhodes VK 1000 so I can't say how complete or helpful it is or not. The feel of the keyboard is also very good as the keys are weighted and have an overall great feel to them.

The sounds on the Rhodes VK 1000 are pretty good as a whole, with some of the tones being better than others. Since this is mostly a digital organ, these are the sounds that this keyboard excels with, but the other keyboards sounds are not bad by any means and it is certainly nice to have so many different sounds within this single keyboard. There isn't too much more that can be said about the sounds and I would encourage those interested to try it out for themselves or listen to patches online as thats the only true way you can get a good idea of if the sounds will work for you.

I first used the Rhodes VK 1000 organ about a year ago and I'm glad that I came across it as its a very cool sounding little keyboard. They are somewhat hard to find but not impossible and usually sprout up at pretty reasonable prices. If you are looking for a nice organ that also hosts a variety of other sounds, the Rhodes VK 1000 is worth looking into.
Le Rhodes VK 1000 orgue est un clavier complet de taille numérique qui est surtout connu pour ses sonorités d'orgue, mais qui contient toutes sortes de sons de clavier. Il a la polyphonie complète et dispose d'une tonne de fonctionnalités différentes pour contrôler les correctifs et des effets différents.