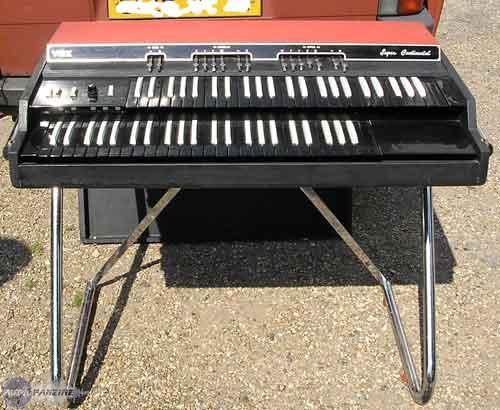 (contenu en anglais)
Afficher la traduction automatique
Afficher l'avis original
The Vox Super Continental organ is a dual keyboard compact electronic organ. It has outputs for a speaker cabinet, as well as for a sustain pedal and organ foot pedals, among other connections. The Vox Super Continental has all types of sounds, but specializes in a cheesy organ sound, rather than your traditional Hammond or pipe organs sound. The keyboard is fully polyphonic.

The configuration of the Vox Super Continental is pretty easy to follow, but it does take some time to figure out what everything does because there are a lot of parameters and functions available on this organ. It is easy to get basic tones and to explore different sounds, but mastering the uses of the Vox Super Continental can take a little while. I don't have a manual for this keyboard, so I can't speak to how helpful it is or not.

The sound of the Vox Super Continental is awesome, but it does have its specified use and isn't incredibly versatile. It is more versatile than most of the other compact organs made by VOX, but still outputs a similar tone throughout the entire spectrum of the instrument. The Vox Super Continental is easy to play, with the keys being quite light and pretty sensitive. Overall, a great sounding organ for what it is when you are looking for that compact organ sound.

I've been using the Vox Super Continental compact organ for about a year and it is one of my favorite organs of this type that is out there. I'm a big Elvis Costello fan, so naturally I would be a fan of the sounds that this has. It is somewhat rare at this point, and isn't that cheap if you can find one used, but also isn't that expensive. Overall, this is an awesome keyboard that I highly recommend for those interested in a great compact organ.

(contenu en anglais)
Afficher la traduction automatique
Afficher l'avis original
This is a really classic organ that has been heard on countless recordings from the 60s and 70s. The most obvious examples that I can think of would have to be The Doors' Ray Manzerak who used them a decent amount, and especially Steve Nieve of Elvis Costello's band the Attractions. There aren't any ways to update this organ, it predates Macs and PCs, as well as MIDI for that matter. It has minimal controls, drawbars for tones (two tones) and four for octave selection. There is no controller for vibrato, it is unison for all settings. It is polyphonic.

It's an easy organ to use, actually far less of a burden to operate than a B3. I haven't seen a manual for one officially, I found guides on the internet to help me find out how to set it up and operate it, etc. The setup isn't that simple, but with the guide I was able to do it, and I'm assuming most people could do the same thing. I could have just asked the owner but I wanted to know exactly how to do it myself.

The sounds that come out of this organ are really cool. While they don't really have the intensity of a B3 or most Hammonds for that matter, they are actually really sweet on their own right. I would say that the best way to describe it is a little bit brighter than a Lowry or B3, but also a bit more nasal and colorful. They are certainly rather thin, though not annoyingly so. The tone actually fits really well into many styles of music, from new wave to classic rock, as well as gospel and blues type music. I don't think I've played any kind of simulation that feels or sounds like the real thing, which makes it really special.

I think that the relative portability, as well as the nostalgic and classic sound, are the two main selling points about the organ. The worst part is that they are really really hard to find nowadays, and if so, they are extremely expensive. I had the fortune to have a client use one so I got to really experience it firsthand (especially since I had to set it up for him). The best thing to do in this situation is probably to go with a Nord replacement if you really can't swing the real deal. I would say that most people can't actually, which is hands down the most disappointing thing about it.
Ceci est un organe très classique qui a été entendue sur d'innombrables enregistrements à partir du 60 et 70. Les exemples les plus évidents que je peux penser faudrait The Doors Ray Manzerak qui a utilisé une quantité décente de les, et surtout Steve Nieve de la bande de Elvis Costello les attractions. Il n'y a pas les moyens de mettre à jour cet organe, qu'il soit antérieur à Mac et PC, ainsi que MIDI pour cette question. Il a des contrôles minimaux, timons des tons (deux tons) et quatre pour la sélection d'octave. Il n'ya pas de contrôleur pour le vibrato, il est l'unisson de tous les paramètres. Elle est polyphonique.