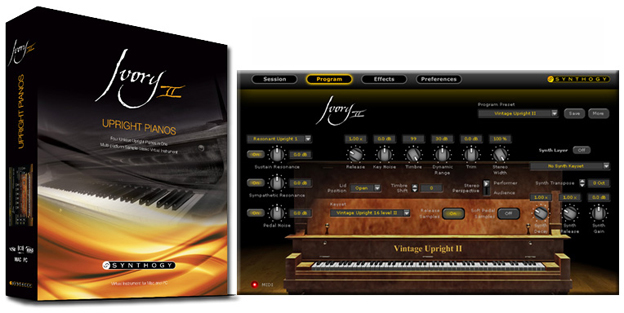 (contenu en anglais)
Afficher la traduction automatique
Afficher l'avis original
Synthogy Ivory II Upright Pianos is a VST that is compatible with both Mac and PC computers. I was looking for something to replace my piano sounds of the Korg Triton with. I ended up reading about the Ivory II on the Synthogy website and decided to give it a go. Immediately after I tried it during the trial I was very excited. I could not believe that I could get a realistic sounding piano out of a VST. I immediately purchased it and I have been using it since then. It was quick and easy to install and I feel like it was the best 250 dollar investment that I have made in buying sounds for my music.
The Ivory II has up to 18 different velocity levels per piano type and it has an EQ. I do not choose to use the EQ though because I feel like just routing it to a mixer track in Reason and using an EQ plug in was easier for me because I was already familiar with out to use the EQ in Reason and it would take me more time to learn to EQ the way I wanted in Ivory II.
The sounds are really amazing, all of the pianos are very good and they are the best possible sounding pianos that you can have in digital form. You will get the sound of some of the most legendary pianos ever made right on your computer. I have been sold on this software since Mid 2012 and I will use it forever now. I plan on buying more Synthogy plug ins in the near future and if any of them are as good as Ivory II is then I know I will be 100 percent satisfied.
I did not have the privilege of using Ivory I but I am sure if I would have had that years ago I would have been happy. My only regret is not hearing about this plug in when it first came out because I could have got rid of some hardware taking up space in my home studio (the hardware that I am using just for piano sounds).