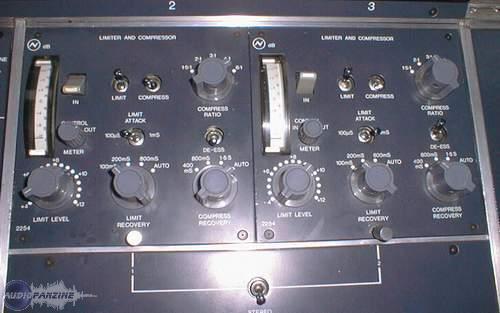 (contenu en anglais)
Afficher la traduction automatique
Afficher l'avis original
The Neve 2254s are classic compressor/limiters that were first made in the late 1960's and have now been recreated in rack mountable form. Neve themselves has started to make a stereo compressor that comes in a single space rack mountable casing. These compressors are made up of all analog components, and depending on which you buy it could have any number of connections. The 2254 that I used was an older one and was already in place in the studio, so I didn't have a need to check out the connections that it had. The newer 2254s only differ in it's casing and in the fact that they call it the 2254-R.

I didn't find that using the Neve 2254 to be any bit hard at all. I had had a lot of experience using compressors even when I first used these a number of years ago, so I was able to catch on pretty quickly. However, it does have more parameters than you would find on most compressors, including knobs for ratio, limit level, limit and compress recovery (gain make up), and switches for choosing between using this as either a compressor or limiter and for setting your attack. It also has some metering options and a unique looking meter. I don't know where you would find a manual for the original 2254, so I've never seen one and haven't felt like I needed to anyway.

The Neve 2254s are definitely some of the thickest and heavy sounding compressor/limiters that I've used, which for me is a good thing. I can't say that they are better for one application over another, but in general are great for thickening up your tone. They do offer a good amount of control as well, so shaping them to different situations doesn't prove to be too difficult. I will say that perhaps my favorite use of them is on vocals. I've used them for a few different male voices and found that it made a world of different. Again however, they can certainly be used for just about any application where you would want a thick sounding compressor.

I can't say how the new 2254-Rs stand up to the original 2254, but I would bet that they are pretty identical. No matter which way you choose to go, getting your hands on on of these will cost you a pretty penny. Since the new 2254-R's are being made by Neve, it will definitely cost you close to as much as it would an original if I am not mistaken. If you're looking for any sort of great sounding compressor/limiter, and are a professional or someone who can spend a serious amount of money on them, definitely don't make a decision until you've considered the 2254.
Les Neve 2254s sont des compresseur/limiteurs classique construis à la fin des années 1960 qui ont été recréés dans une version moderne en racks. Neve eux-mêmes a commencé à faire un compresseur stéréo qui vient dans un boîtier en rack simple espace montable. Ces compresseurs sont constitués de tous les composants analogiques, et selon que vous achetez il pourrait avoir n'importe quel nombre de connexions. Le 2254 que j'ai utilisé était un ancien et était déjà en place dans le studio, donc je n'ai pas eu besoin de vérifier les connexions qu'il avait. Le 2254s nouvelles ne diffèrent que par ce boîtier et dans le fait qu'ils appellent le 2254-R.