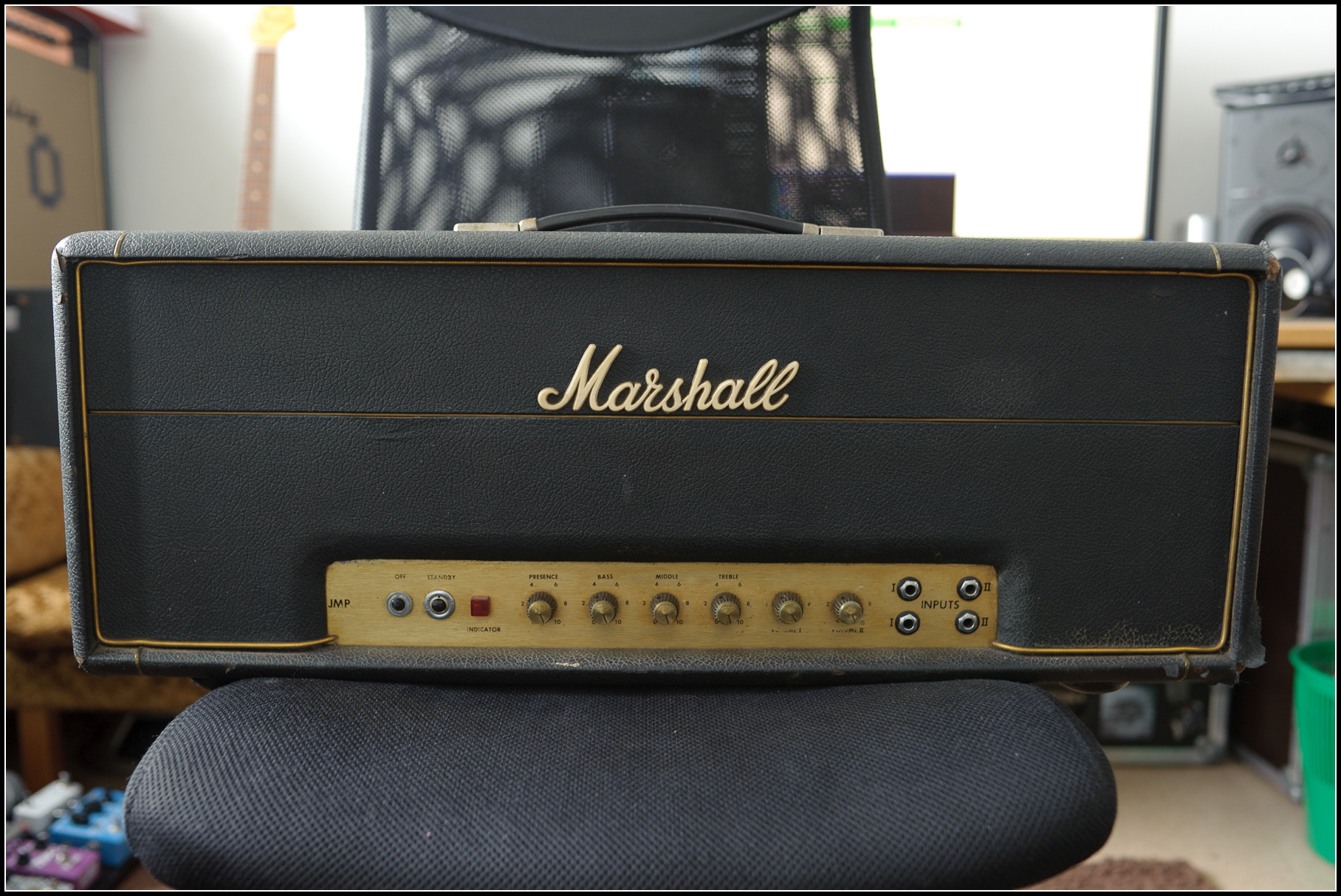 (contenu en anglais)
Afficher la traduction automatique
Afficher l'avis original
The Marshall JMP 1975 is a guitar amp head that is tube based and gives you 100 watts of power. It has two 1/4 inch connections in the front for either hi or lo input and has a speaker output in the back so you can send this amp to a head. It has two switches for power and for standby and has a slew of parameters including volume, gain, EQs, and reverb. It is a pretty versatile amp in terms of different sounds and since the parameters are pretty standard as far as what would be seen on other amps, anyone can use it easily.

The configuration of the Marshall JMP 1975 amp is really easy to follow, as all of the knobs are clearly labeled and easy to find. Anyone who has any experience with guitar amps should have no problems learning how to use this, as it is very basic. Getting a good sound is easy as the inherent tone on the Marshall JMP 1975 is great, whether you are looking for dirty or clean sounds. I don't have the manual for this amp, but you really don't need it.

The sound quality of the Marshall JMP 1975 amp is great for all types of music, but I like to use it mostly for rock and it especially excels when using it for harder rock. Both the clean and distortion sounds are awesome, but this amp makes its living cranking out great sounding distortion tones. The variety of parameters allows you to zero in on your tone pretty acutely and it is always a pleasure to work with this because it always seems to sound good.

(contenu en anglais)
Afficher la traduction automatique
Afficher l'avis original
Like always I was searching for tone. I bought a Hiwatt Dr103 and it was made for Canada so the model number was a little different but still a DR103 nonetheless. I played that for a while but it could never get out of the classic rock vibe. So I traded a guy for his 1974 Marshall JMP 100. That was a very good decision that I don't regret.

I got this thing home and man was this a screamer. The first thing I noticed was how sparkly clean the clean tone was. I don't find Marshall to have a very good clean tone but this sure did. I slapped an Ibanez TS9 in front of it and man it sounded to good. This amp was made to take pedals in my opinion very well.

The best thing this amp has for me is to jump the channels. It gives that boomy punch that hits you in the gut or chest which I like and others don't. Just a great punch to it when channel ganged.

Basically a drunk monkey could figure out how to use this amp. Just beware that as soon as you turn the volume past 1 it gets scary loud. Be prepared that the taper on the volume doesn't work like your television. In between 3-10 the volume doesn't change much it just gets overdriven. I have never used a variac with it like the infamous EVH did but hey maybe one day I'll buy one.

Use a small jumper cable and plug it in the lower input of volume 1 and the other end in the upper channel of 2 and dial in that volume as desired for a nice jumped plexi tone.

I liked using my amp jumped with a nice OD pedal in front of the amp. My pedal of choice with this amp was a Boss OD-2. I would click the OD-2 in turbo and man was I getting scary close to Paige tones. I was using a Les Paul of course.

I also enjoyed using a TS9 with it which gave it even more of a vintage vibe with a little less gain. I was running the amp into a vintage Marshall 4x12 with blackback speakers in it. For classic rock this was the best I could possibly achieve. If you slammed the front of it with a Boss SD-1 you would get great 80's rock tones.

Maybe my all time favorite guitar amp. Not an amp I would ever go out and gig with but I have recorded with it several times and it sounds fantastic. I would want to own another one when I get a little money saved up. I would recommend this amp to any Marshall lover. It is classic tone and will not disappoint. I think you can find them for around $1200 if you look hard.
Comme toujours je cherchais ton. J'ai acheté un Dr103 Hiwatt et il a été fait pour le Canada de sorte que le numéro de modèle est un peu différent mais toujours un DR103 néanmoins. J'ai joué que pendant un moment mais il ne pourrait jamais sortir de la vibe rock classique. J'ai donc négocié un mec pour son JMP 1974 Marshall 100. Cela a été une très bonne décision que je ne regrette pas.