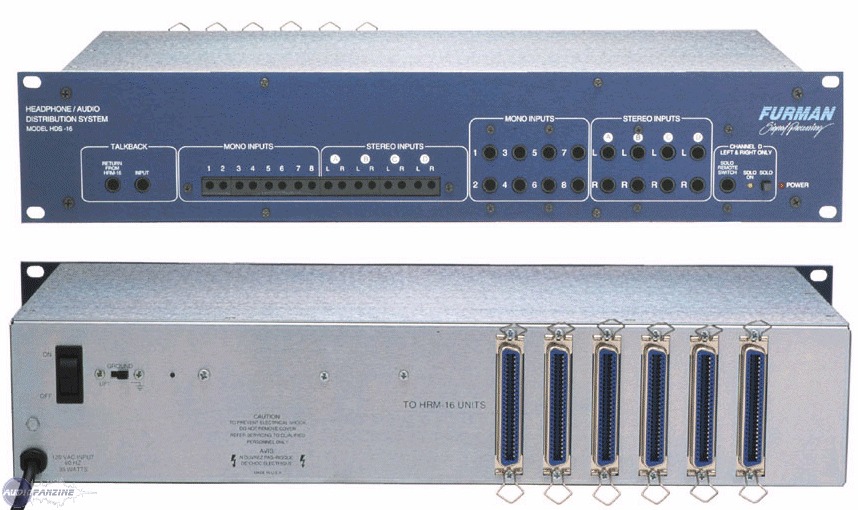 (contenu en anglais)
Afficher la traduction automatique
Afficher l'avis original
The Furman HDS-16 is a 16 channel well made headphone system. The HDS-16 is more of the big brother to the HRM 16. It comes in at the price of 1100 dollars which is a great buy for what you are getting with it. The HDS-16 has 12 input channels and 12 output channels (extra) . There are 16 ¼ TRS and 16 1/8 TRS input channels and no digital inputs or digital outputs on the HDS-16 by Furman. The unit is less than 10 pounds making it very portable. It can be racked and will take up more than 1 rack space.
My favorite feature of the HDS-16 is the talkback system. The talkback system will let each person talk to each other as well as talk to the engineer in the mixing room. The HDS-16 is something every studio needs and it is great for live shows and practices. We have had the chance to use it a few times over the last 2 years and each time we get to use it, it makes us want to buy one. We just don’t have the use for it as of right now. But the studio that we go to does have it, which is great because we get the chance to use it whenever we want to. The sound quality is great and second to none. I have used several similar models and even models from Furman but this is the best one hands down. It is well made and will last a long time. We have not used it on a stage or for live shows just in the studio. But I have heard that it is very convenient to have for a live show because of the talk back feature. The talk back feature alone is what makes me really want to go out and purchase it.