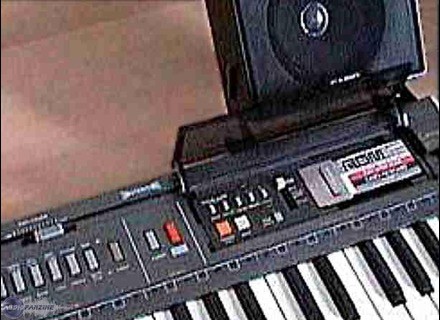 It also has detachable external speakers (with regulated angle allowing to play a bit with acoustics) that make the thing look pretty unusual but pretty in my eyes - the speakers are of high quality and they're quite powerful in fact.

Appearances have it look a bit more serious than you regular MT.

4 octaves, mid keys, a standard chord section with no appregiator .

There's also a light-system with LEDS along with the legendary RAM card with learning 'games' , and a limited sequencer/recording mode. All nice curiosities of an era long gone adding to fact that these keyboards look a lot out of date.

Despite the limited functions, the keyboard is pretty good sounding in all sections, chord and bass, nice quality analogue drums and especially nice tones (the chorus shines too!). Back in its day it used to be an expensive one, still today it's usually priced above other casio MTs. Its also heavier, even if you exclude the speakers.

It definately has its own character!

easy and hands on control, like with all these oldies.

the ram card functions are a bit more tricky, but you can find the manual online, so...

Compared to the other 3 Casio MTs I got and tested out, MT-45 and MT-52, this would be considered to have the most "quality" tones, and even realistic in some occasions ... so maybe this might be the the best choice for someone who would like to buy one of the best sounding Casio MTs. Or lets say this one is less on the cheesy side.

[note: i ahve not listened to the well known mt-68]

mt-800 is also a highly bendable Casio and the already quality tones and be tampered further with filter like results, making them even smoother.

For a serious modifier/circuit bender, this keyboard is really worth exploring, given the quality of the tones and the apparently analogue filtering of the tones. Additionaly, the drum sounds are also very nice sounding and appealing and can also be modified in some ways.

This is the keyboard that by a strike of luck got me into circuit bending, along with researching and enjoying an old passion of mine: old keyboards