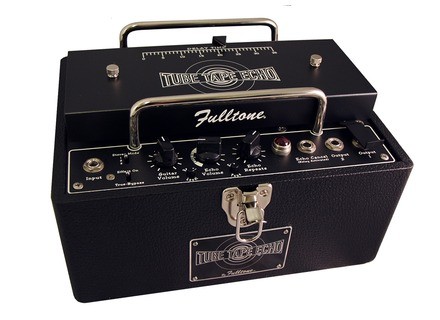 Fulltone Tube Tape Echo
5
Afficher la traduction automatique
Afficher l'avis original
This is a tape echo unit. It's quite bulky, and large, which might make it seem difficult to use. I honestly wouldn't recommend carrying it around much unless you absolutely must, and even then, make sure you have a heavy duty case for it. The thing is honestly too big to tour with, though, so it's better used at home or in the studio. It actually contains tape, which is used for the echo effect, thus it is a legitimate tape echo. Thus, it has sounds that can really not be replicated fully by any pedal. This model is good because it is less noisy than most tape delays. It has two modes, hi-speed and low-speed, which both result in high end and low end tones, respectively. It has three knobs, echo time, echo volume, and echo repeats.

This is a pretty simple pedal to operate. It goes from a quick slapback to up to 2 seconds of delay, which is long for a tape unit. It has a lever up top that will adjust the speed of the tape inside. It also uses tubes to help lower noise, which makes finding good tones easier. The manual is pretty complex, but it is sufficiently in-depth, and if not, the fulltone website has more than enough information to answer the questions. It is far less problematic than the tape echos of old due to its modern design and updates on the vintage gear.

This is probably up there with the best tape units I've ever seen. It has a better sound than the vast majority of analog and digital units I've encountered. It has such a unique, psychedelic sound that I can't really believe it. It is the absolute perfect way to get the Pink Floyd, psychedelic sound for guitar. It also has a feature where you can split it into a stereo signal, and have one side of it be the guitar signal itself, and the other side have just the echo effect, getting into some wacky stuff. All in all, this is probably the most fantastic-sounding unit out there.

Fulltone Tube Tape Echo
5
Afficher la traduction automatique
Afficher l'avis original
The Fulltone Tube Tape Echo is essentially a reissue of the classic Mastreo Echoplex tape echo box. It gives you a true tape echo sound right in a nice and compact box. It’s got handles to carry it around, with ¼” connections for your input, two outputs, and a playback and echo off output as well. It’s not a rackable piece of gear as it comes in it’s own portable box.

The make up of the Fulltone Tube Tape Echo isn’t hard at all to follow. It has a nifty slider to set the delay time, which ranges from 0 to 35 ms, as well as knobs for guitar volume, echo volume and echo repeats. It also has switches for bypassing the effect and for setting it to a stereo mode if needed. Lastly, it has two smaller knobs for record level and echo tone. I doubt most users will require a manual for this…

The sound of the Fulltone Tube Tape Echo is pretty much just like the real thing. Even if it doesn’t match up exactly with the Mastreo Echoplex, which I’m not sure if it’s suppose or not, it’s an incredible sounding delay in it’s own right. You can definitely get a nice collection of different analog delay tones, but I like it best for it’s slapback. It’s hard to really describe how good this box sounds without you having the chance to hear it, but this is the ultimate true analog delay box for applications of all kinds.

While it’s going to cost you a pretty penny, the Fulltone Tube Tape Echo is really an incredible delay box. It’s perfect for use on anything and everything in the studio, but also would be awesome for your guitar on gigs. I don’t know what it costs to get an original Echoplex, but I would think that it’s definitely worth looking into this instead since it’s probably a bit cheaper (or around the same price) and is going to be in much better shape. Absolutely worth a try for anyone interested in acquiring an incredible delay box.
L'Écho Fulltone Tube bande est essentiellement une réédition de la boîte classique Mastreo Echoplex écho à bande. Il vous donne un son de bandes vrai écho à droite dans une jolie boîte et compact. Son obtenu poignées pour le transporter, avec des connexions pour votre entrée, deux sorties, et une lecture et echo off sortie ainsi. Ce n'est pas un morceau rackable d'engins comme elle vient dans sa boîte portative propres.