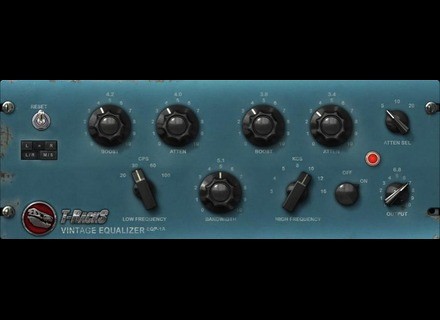 IK Multimedia T-Racks Vintage Equalizer EQP-1A
4
Afficher la traduction automatique
Afficher l'avis original
The IK Multimedia Vintage Program Equalizer is a software effects plug-in to be used in a DAW or with the IKM T-racks mastering suite. The software can be purchased off the IKM website, downloaded, and installed. Authorization is completed using the IKM Authorization software application. Recently, IKM released the T-racks Custom Shop application that can be used to purchase the plug-in. I had used the IKM Amplitube Custom Shop for a while and was familiar with how it worked. In this scenario, you have to buy 'gear credits' with cash then you use the credits to get gear.

The controls on a Pultec-style EQ are little different than a standard EQ. IKM included the standard controls to be similar with the hardware version. It might seem counter-intuitive to boost and attenuate at the same frequency, but in reality these to dials are not inverses of each other. I recommend experimenting with both settings together, and watch some YouTube videos to see popular ways of using the EQ. There are also a few presets included with the plug-in if you want to try out some examples/suggestions.
The amount of gain that can be added is plenty. I typically only boost or cut at levels of 3 or 4 out of 10 even for applications like kick drums that typically need a lot of eq.
If there was one complaint about the IKM Vintage Program Equalizer, it would be that were is not more mid-range frequency control. I like to do a lot of subtractive eq in the mid-range to cut frequencies that resonate badly. The 'cut' on this eq is only limited to low frequencies and high frequencies. Waves has a similar emulation/model of the Pultec Eq. Waves has a separate mid-range plug-in that complements this Pultec Eq.

Pultec-style EQs are really popular in music production because they are unique and musical. The combination of 'boost' and 'attenuation' really thickens up a kick-drum, bass guitar, or overall mix. The high frequency equalization is very smooth and tasteful. The IK Multimedia model can do all these things. I haven't ever tried a hardware version of a Pultec EQ, nor have I tried any other software models (Waves, UAD, Digidesign, etc). They all might be a little bit different, but as long as the IKM version gets me close, I am happy with it.

IK Multimedia T-Racks Vintage Equalizer EQP-1A
5
Afficher la traduction automatique
Afficher l'avis original
IK Multimedia's T-Racks Vintage Equalizer EQP-1A is a plug-in that comes with the T-Racks 3 Deluxe Mastering software. It can also be purchased as an individual plug-in in any relevant format, but it's really worthwhile to buy T-Racks 3 in my opinion. As far as installation go, it depends on if you're installing all of T-Racks 3, or just this individual plug-in. I've only used this within T-Racks 3, but either way it shouldn't be unlike installing any other plug-in or software. In terms of the interface, it's got the exact same make up as the Pultec that this is modeled after. It is a two band equalizer that is very simple to figure out, even if you don't have experience with the Pultec or one of it's many replications.

I'm running the the T-Racks Vintage Equalizer EQP-1A plug-in and the entire T-Racks 3 suite on a Mac Book Pro that has a 2.2 Ghz Intel Core 2 Duo processor and 4 GB of RAM. I've run it both in Pro Tools LE 8 as an individual plug-in, and in T-Racks 3 stand alone. I haven't had a problem running it in either format, although T-Racks 3 does take up a whole lot of processing power. It also does take up a good amount of space if you use it as an individual plug-in, but not so much in my system that I wasn't able to run it well.