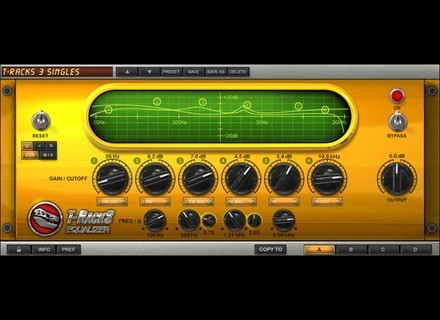 IK Multimedia T-Racks Classic Equalizer
4
Afficher la traduction automatique
Afficher l'avis original
Installing IK Multimedia T-Racks EQ was quick and easy. I had no compatibility errors and it has been running smoothly since I installed it. The interface is extremely easy to follow and there is really nothing complicated about this plug-in. I don't have a manual so I can't speak to how useful it is or not.

I run the T-racks EQ on my Mac Book Pro with a 2.2 Ghz Intel Core 2 Duo processor and 4 GB of RAM. I use it in Pro Tools LE 7.4 with a Digi 002R audio interface. It has always run flawlessly on this set up and I am able to run a few of these at once. It is a simple plug-in which doesn't take up too much of your processing power and is a great sounding EQ as well.

I've had this plug-in for two years and it has become a great tool in my arsenal as far as equalization goes. The ease of the interface makes it easy to do what I want it to do. The sound quality is good and it is definitley a good option when looking to use an EQ plug-in. I have used it on everything from vocals to drums. It also sounds good on electric guitars. In terms of drums, I like it on all types - kick drum, snare drum and tom toms, as it is easy to manipulate and get the sound I am looking for. While I use it mostly for these applications, this is a good overall EQ and can be used on just about anything you'd like. It is comparable to the Digidesign EQ III plug-in that comes free with Pro Tools, but it a little better sounding to my ears. While it isn't free, it is sold at a cheap price and is worth it to me to have another option like this in my DAW - this is definitely worth a look.
Installation IK Multimedia T-Racks EQ a été rapide et facile. Je n'avais pas d'erreurs de compatibilité et il a été bon fonctionnement puisque je l'ai installé. L'interface est extrêmement facile à suivre et il n'ya vraiment rien de compliqué ce plug-in. Je n'ai pas un manuel donc je ne peux pas parler combien il est utile ou non.

IK Multimedia T-Racks Classic Equalizer
4
Afficher la traduction automatique
Afficher l'avis original
The IK Multimedia T-Racks Classic Equalizer is a plug-in that comes in the newest version of T-Racks 3. It is modeled after the equalizer that is found in T-Racks 2. The plug-in is also available as a single plug-in if you want to buy it outside of T-Racks 3. The process of installing T-Racks 3 as a whole was easy enough, but I can't say anything about installing this as an individual plug-in. The interface of the plug-in consists of six bands, including a high and low pass on both ends. The four middle bands have parameters for gain and frequency, with the most middle two also have knobs for gain. There is a graph that is easily manipulated on it's own if you don't want to use the knobs. Lastly, there is a knob for overall output level and a bypass switch. I haven't seen a manual for this plug-in individually, and I'm not sure if there is specifically something on this plug-in in the T-Racks 3 manual.

Right now I'm running T-Racks 3 and the IK Multimedia T-Racks Classic Equalizer plug-in on a Mac Book Pro that has a 2.2 Ghz Intel Core 2 Duo processor and 4 GB of RAM. I run the plug-in both in T-Racks 3 as standalone software and in Pro Tools LE 8 as an RTAS plug-in. For Pro Tools LE 8, I have a Digi 002R audio interface. All of the plug-ins in T-Racks 3 take up a decent amount of processing power, as is the case with this one. It doesn't seem to take up as much processing power as some of the other T-Racks 3 plug-ins do, but you would still like it to be possible to run it without taxing your system as much as it does.