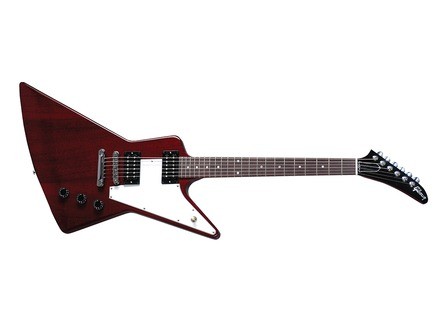 Gibson Explorer
5
Afficher la traduction automatique
Afficher l'avis original
The Gibson Explorer was introduced in 1958. It was an outlandish design for the time, and as a result, low demand caused only 100 to be made. These are now incredibly collectible, sometimes fetching 6 figures on the auction block.

Gibson shelved the design, and reintroduced it in the 70's with a few updates, one of them being the choice of pickups. By this time, the Gibson 496 and 500T pickups had been introduced, giving players more power over the previous model of humbuckers, which were lower output.

As a result, the Explorer quickly became popular for the evolving sound of rock n' roll that pushed for more distortion and sustain.

Someone at Gibson must have visited a psychic while designing the Explorer. The psychic would have said "guitar players will have the desire to play fast, much faster than today." because that's exactly what the Explorer is designed for - blazing speed. One listen to Brenden Small's guitar playing on any Dethklok album will confirm that shredding is a breeze on this guitar. Access to the higher frets is open, making those wide runs easy.

To facilitate this, the fretboard radius feels rather flat all the way down the neck, allowing for easier bending and faster runs than more traditional radius fretboards. Still, its nut width and scale length are Gibson standard sizes.

It doesn't take a keen eye to see that the Explorer isn't the most ergonomic design in the guitar world. In fact, it's rather large and awkward, which is ultimately why I ended up selling mine. Moving around a small stage or practice area almost always resulted in bumping the headstock or rear corner of the body on something or someone. However, despite its size, the Explorer is surprisingly light in weight.

The Explorer does well with a variety of sounds, but it would be a mistake to assert that its forte is not rock and metal. The 500T comes alive through a properly distorting tube amp, driving the preamp into harmonic armageddon and evoking a midrange grind that is addictive. This pickup works well with everything from Bad Company-style plexi gain to Stoner Metal to compressed, soaring power metal.

The 496 does cleaner tones and alternate-picked runs surprisingly well, although lower notes tend to blend together on fast runs. It has a very warm, mellow quality without being weak.

The 2009 Explorer I owned was immaculately constructed, leading me to wonder where the complaints of quality with newer Gibson guitars was founded. The guitar played well, sounded excellent, and looked badass. I actually regret selling it, and will likely own another some day.

Gibson guitars have a lifetime warranty, and are still hand-made right here in the USA. There are plenty of great guitars made elsewhere for less money, and there are many excellent values from many manufacturers. I think every guitar player should own at least one Gibson in their lifetime, to have a chance to connect with a great American legacy that has helped shape an artform and a culture for more than 75 years.
L'explorateur de Gibson a été introduit en 1958. C'était un design extravagant pour l'époque, et, par conséquent, une faible demande due seulement 100 à faire. Ceux-ci sont désormais incroyablement collection, parfois aller chercher 6 chiffres à l'encan.

Gibson Explorer
5
Afficher la traduction automatique
Afficher l'avis original
The Gibson Explorer guitar is a very fun guitar if you like weird body shapes. It has a distinct tone but goes right with the rest of the Gibson products. If you've ever use a Gibson Les Paul or Gibson SG and you'll be very comfortable with the neck and the feel of this guitar. Strange body shape will make you or force you to use a guitar strap at all times. Good luck trying to play this guitar on your lap or a stool because all body shape just presents itself for difficulty. That is my only downturn with this guitar. It has a very cool rock edge to it and the sharp points and corners make it very inviting for most hard rock and metal players.


The tone of this guitar is extremely Gibson like. It's features mahogany wood in the body and in the neck. You have rosewood fretboard as you would most Gibson products. It's a very thick and warm tone that just seems and sustains very well with a good high gain amplifier. These guitars don't sound that great with a clean setting so if you're running a clean amplifier such as offender or Roland amplifier then you're going to have to use some compression or some chorus to really lighten up thick and warm tone that this guitar naturally has. Overall this is a great instrument and a fun instrument to play. The look of it is exciting as well and it just carries that nice rock sound and authority.