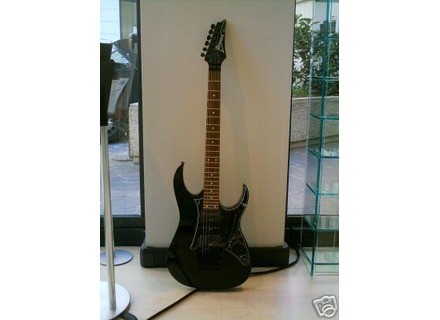 Voir les autres avis sur ce produit :
Afficher la traduction automatique
Afficher l'avis original
Ibanez has had tons of variations of the RG. The RG505 is basically an RG550 with a rosewood fretboard instead of a maple one. The guitar features a basswood body with a black pickguard, maple neck with rosewood fretboard, 24 jumbo frets, an Edge bridge, HSH configuration, one volume, one tone and a 5 way switch.

The guitar is as good as any other RG, really. In fact, this guitar reminds me more of the RG570 than anything else. The quality is generally fairly good on the old Japanese RGs, and I find them to be a bit more resonant than the newer ones. The fretwork on these is usually pretty good, and the higher frets are very easy to access. The Edge bride is probably one of the best floyds out there in terms of both feel and stability.

The stock pickups in this guitar are pretty bland sounding. Once you replace them, however, it really comes to life. DiMarzio makes tons of pickups that sound very good in basswood guitars. The HSH configuration also leads to the ability to get tons of tones. It can get that strat "quack" sound with the 2 and 4 positions. The middle position is great for clean passages. The neck and bridge humbuckers deliver full power brutality when you need it, and they can really overdrive an amp if you put the right pickups in it. I love basswood when it comes to fusion and shred style music.