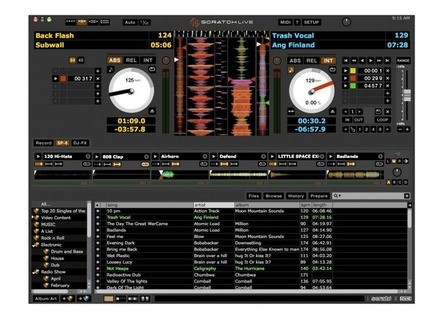 Serato Scratch Live 2.0
Afficher la traduction automatique
Afficher l'avis original
I actually had no choice in the matter. I was scheduled to do a gig with music videos on my boss' computer and he only uses Serato Scratch Live. He owns a Rane mixer, and thats what I connected to. Not sure about his computer specs, but it was an older 13'' MacBook.

I didn't witness the install as it wasn't on my computer, but I spent a couple of hours before the gig familiarizing myself with the program and it was a breeze. I'm a huge Traktor fan and I thought having to learn Scratch pretty much on the fly would be hard, but I was totally wrong. It was a very easy process and configuring the video set-up was as easy as pressing the Video SL button and dragging the video pop-up screen over to my projector. Although some of the interface views confused me, it was by and large a very easy to learn program.

With the music videos on and the music bumpin' my configuration and the program's performance were rock solid. Like I said I used this program with a Rane Mixer, and only a Rane mixer (the turntables were being used at another event). I felt like I did most of my operations on the SSL screen itself and felt pretty comfortable with the transitions and effects I was able to trigger. The mixer, although a Rane/Serato product, didn't add much to the mix other than the tactile sensation of having some faders (track A + B, master volume, and a cross fader) and knobs (basic EQing). I have only used this product for three shows, but had totally solid performances each time.