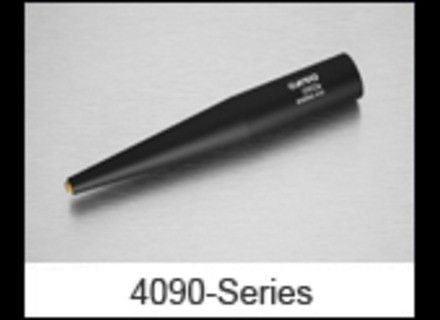 DPA Microphones 4090
5
Afficher la traduction automatique
Afficher l'avis original
The DPA Microphones 4090 is a small diaphragm condenser microphone designed for use in the recording studio. The mic is uniquely designed, but picks up the standard frequencies between 20 Hz and 20 kHz. It has a omnidirectional pick up pattern, making the 4090 great for micing from above. For this reason, I guess it can be used for live shows as well, but I haven't done so and would only recommend it if you're going to be using it to record a live show rather than for live sound reinforcement.

In terms of sound quality, the DPA Microphones 4090 is very silky sounding and offers up a lot of clarity. It is definitely suited best for acoustic instruments of all types, as I've had awesome results with it on an acoustic guitar as well as for both banjo and mandolin. Although I haven't yet had the chance to try it with the following applications, I also think the 4090 would work well on violin and as drum overheads or for micing up individual cymbals like a hi hat or something like that. It's sleek design makes it easy to position and especially useful for hanging them from the ceiling or from a similar location. The DPA Microphones 4090 is actually a lot less expensive than I would have thought, as the first time I used it I thought for sure it would be worth more than it is. So in my opinion you're getting a great deal with the 4090, but it still probably won't be cheap enough for home studio owners. In essence this is a professional's microphone, so I'd really only recommend it for professionals looking for a super clean sounding small diaphragm condenser for a number of different applications. All in all the 4090 is a very well made and designed microphone that will give you some great results when used properly in the recording studio.
Le microphone DPA 4090 est un microphone à condensateur à petit diaphragme conçu pour une utilisation en studio d'enregistrement. Le micro est particulièrement bien conçu, mais capte les fréquences standard entre 20 Hz et 20 kHz. Il a un diagramme de directivité omnidirectionnel, rendant le 4090 idéal pour la captation d'en haut. Pour cette raison, je suppose qu'il peut être utilisé pour des spectacles vivants ainsi, mais je ne l'ai pas fait et ne le recommanderait que pour l'enregistrement d'un spectacle plutôt que pour la sonorisation.