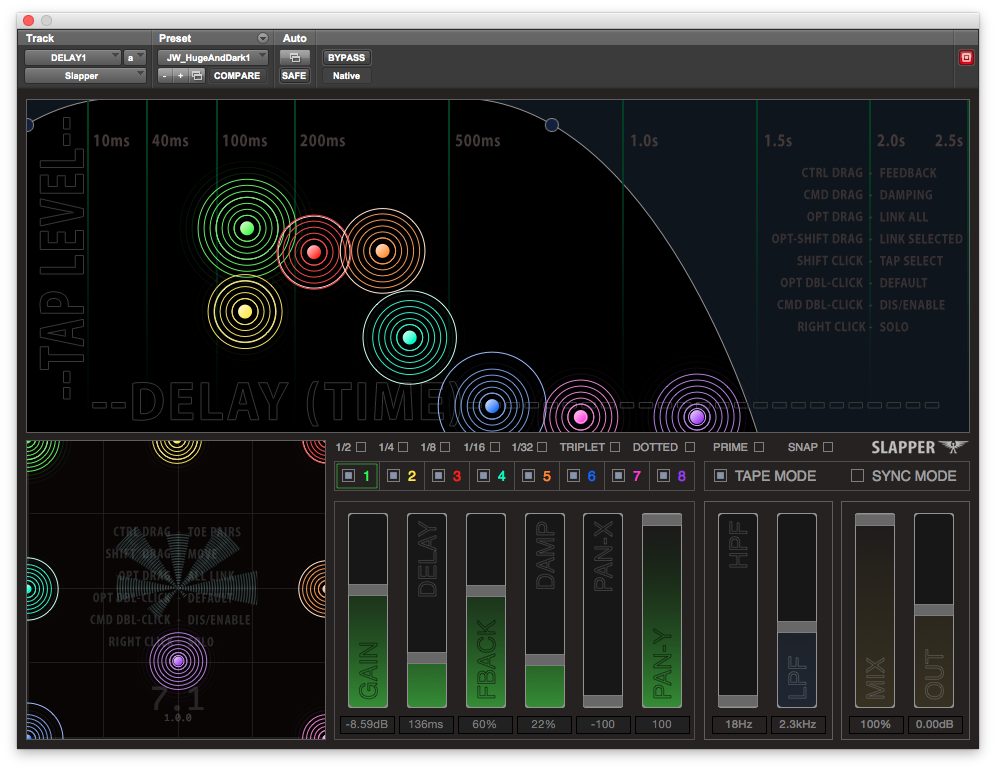 8 fully independent, stereo-pannable delay taps
You should think of it more like 8 delays in one box. Each tap has completely separate delay time, level, feedback, damping and pan position. And everything is fully automatable.

Fruity Sound Design with Tape-Mode varispeeding
Like grabbing the flange of an old tape machine while feeding back into it, Slapper can varispeed a signal in realtime, as you change the delay length. The result is an incredible mind-warping speed ramp which you can directly perform using your mouse, mix surface or automation. You can even pitch dive all 8 taps at once while spinning them around the room. Just keep a bucket handy.

Stunning object-oriented interface
At The Cargo Cult we don't abide mimicry of ancient workflows or medieval design practices. We have carefully designed Slapper's interface to give the most immediate feedback, in the most intuitive way, and to give the user the most direct access possible to the objects they are hearing.

Slapper looks exactly like it sounds... and not at all like a dusty rack mounted collection of rotary knobs and switches from 1968.

Multiple filtering options
Each tap offers it's own independent damping control, under which lies a pair of filters. The HF cut is steeper while the LF cut is a little mellower. The end result is a carefully sculpted bandpass effect which gradually pushes the signal further and further into the distance as it feeds back.

Then there are the main output filters, which present as LPF and HPF controls. These are classic 12db IIR filters which affect the overall output of the plugin, after the taps have done their work and been panned to the output channels.

By messing around with the balance between these two filtering approaches, you can achieve an incredible variety of spaces in a very short amount of time.

Crazy rhythmic possibilities
In combination with Sync-Mode, Slapper's tempo grid system opens up all kinds of wacky possibilities for timed delays. You can show and hide different grids based on tempo or prime numbers, and either snap to them or simply use them as a general guide. The result can be super precise rhythmic delays or messed up syncopated grooves that you've never heard before.

Sync-Mode is also automatable so you can jump in and out of rhythmic delay mode throughout the length of your project.

Massive variety and an expanding preset library
We've spent a lot of time playing around with Slapper and making presets and we know you're going to burn many hours doing the same. It's just so addictive that we ended up with a stack of great factory settings covering everything from tiny attics to massive exteriors and endless timed grooves. You'll find stuff from other users, stuff that sounds incredibly real, and stuff that sounds completely out of this world.

And we're going to keep growing the library with each release and as more and more people share their favourite settings. So send them in and we'll immortalise your custom environments in the next release of Slapper.

Beautiful, complex, realistic spaces, without dense reverb tails.
With 8 taps and full panning freedom, Slapper is probably going to cut your reverb usage down considerably. Here at the Cargo Cult, we've been reaching for the delay most of the time, and finding less and less use for traditional reverbs. Delays are discrete in both time and space, so even a small mount of Slapper can nicely define a space or a movement through the room, without getting lost in the mix.

Fantastic console integration
We've put a lot of thought into the console layouts for Slapper, and we reckon you can get great results really quickly by setting up spaces on a hardware controller.

The layouts for the bigger consoles are incredibly intuitive, with a single channel strip representing a single tap, and the 8 taps spread across an 8-fader bucket. Even the little Artist Mix presents Slapper in a very ergonomic way, with each page covering a single tap plus the main output filters and 8 enable buttons on every page.