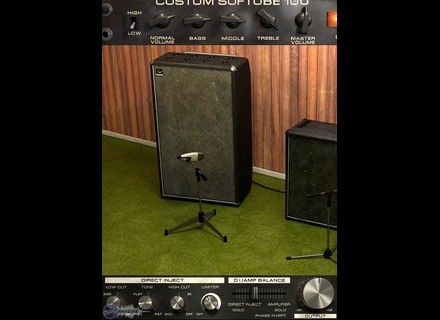 Softube Bass Amp Room
5
Afficher la traduction automatique
Afficher l'avis original
Softube's Bass Amp Room is a bass amplifier simulator plug-in, and a cool one at that. Softube has a few different amp simulation plug-ins in this vein that share the same sort of interface. I don't own this plug-in, as I've just used it at the studio that I work at. It comes in all major plug-in formats and for both Mac and PC. I didn't install the plug-in myself since I don't own it, but I've never heard of us having any problems with it. The interface of the plug-in is really cool, as it gives you three different amps to choose from, all with different settings. You've also got controls for your DI signal and a parameter to balance out the levels between the amp and DI. The amps each have a virtual microphone in front of them that you can actually drag and move into different positions, and is quite flexible and what it is able to do. I wouldn't say that using the plug-in is hard, so I don't think there's any need for a manual.

All of the systems that we have at the studio are Pro Tools HD based, so we rarely have performance issues at all one these systems. For this reason, it's hard to say how much processing power the Softube Bass Amp Room plug-in will take up in an LE type of system or something similar. To me I would think that most users would be okay, but since there are so many different levels of systems out there, it's definitely hard to say based on my experience with the plug-in.