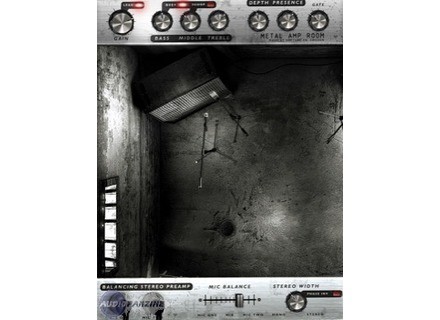 Softube Metal Amp Room
4
Afficher la traduction automatique
Afficher l'avis original
Softube's Metal Amp Room is an amp modeling piece of software that comes in a bundle of these Amp Room plug-ins. I'm not sure if it can also be purchased individually, but it's available in VST, RTAS, and AU formats as well as for both Mac and PC operating systems. I don't own this plug-in as I've just used the bundle and this plug-in individually at the studio where I work. For this reason I can't speak about the process of installing the software. I will say that I really love the interface of this plug-in and the other Amp Room plugs. It's great how much flexibility there is. There are two different types of amps to choose from here, each with the ability to change parameters and to change the mic placement via a 3D virtual interface which is engaging and easy to use. The 'amp' panels give you control over gain, volume, EQ, a gate, and presence. I haven't had a look at the manual for this plug-in, so I don't know how useful it would be or not.

We're running the Softube Metal Amp Room plug-ins on a few different systems at the studio where I work. All of them are Pro Tools HD based, but the A room has Mac Pro desktop that has dual 2.66 Ghz Intel Xeon processor and 10 GB of RAM. Since we're running Pro Tools HD and an incredibly powerful computer, we very rarely have performance issues and for this reason it's hard to say how well this plug-in would run on an LE system...