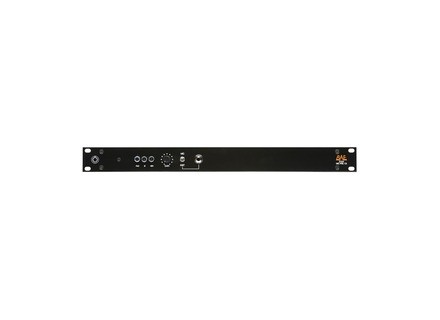 BAE Audio 312A
5
Afficher la traduction automatique
Afficher l'avis original
The Brent Averill 312A comes in both a single channel and dual channel version, the latter of which I have used. It also comes in a 500 series module as well. No matter which version of the 312A you get, it will be made up of all analog components. The stereo 312A has 1/4" connections in the front and XLR jacks in the back of it. It is rack mountable, and will only take up a single space.

I didn't find that using the Brent Averill 312A was a hard thing to do at all. I do have a lot of experience with different mic pres, so maybe someone with less experience wouldn't find it as easy, although it is pretty simple overall. Each channel just has a knob for gain level, and buttons for phantom power, phase, and a pad. These are pretty standard controls for a mic pre, so it should definitely seem familiar. A manual is necessary to learn how to use the 312A.

I really don't have a complaint at all about the way the Brent Averill 312A sounds. It is a very punchy sounding mic pre, perfect for recording a wide variety of instruments. I've only used it for recording snare drum and electric guitar so far, but don't doubt that this sort of sound would work well with any number of different applications. It is definitely a transparent sounding mic pre, and is one that won't add its own colors to your sound at all - what you're sending to the 312A is what you're getting in return, which is certainly ideal. Compared to the other mic pres that I've from Brent Averill, this has a lot more top end and more clarity over warmth...

No matter which version of the Brent Averill 312A you decide to buy, you're going to be getting a good deal. For such a great mic pre, the price of the 312A in all forms is very reasonable. It is definitely more of a professional's mic pre, but would also be perfect for the home studio owner looking for a pair of mic pres to sit on top and to be your 'go to' pre. In fact, if you're a home studio owner without any outboard mic pres, I'd highly recommend picking up a Brent Averill 312A or something similar, as it will make your studio a whole lot better.
Le Brent Averill 312A vient à la fois dans un seul canal et la version à double canal, dont le dernier que j'ai utilisées. Il est également livré dans un module de la série 500 ainsi. Peu importe quelle version de la 312A vous, il sera constitué de tous les composants analogiques. Le 312A stéréo a 1 / 4 "connexions à l'avant et des prises XLR à l'arrière de celui-ci. Il est montable en rack, et ne fera que prendre un seul espace.