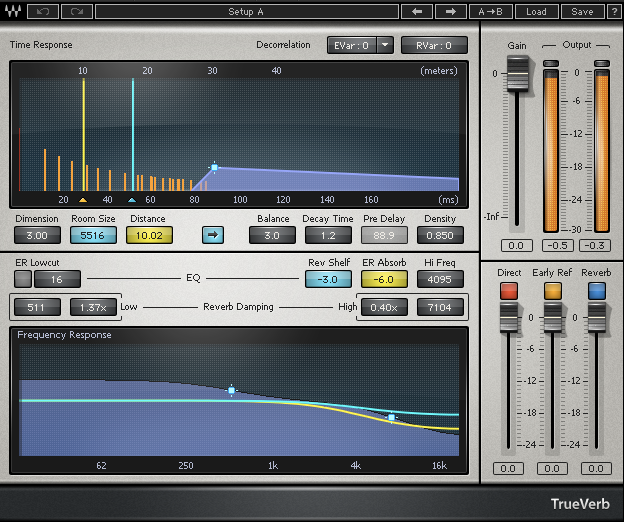 (contenu en anglais)
Afficher la traduction automatique
Afficher l'avis original
There were no compatibility or installation issues getting Waves' TrueVerb up and running. Although basic reverb parameters are easily accessible, the more expressive and in turn more complicated ins and outs of the plug-in take a little while to figure out. However, the graphical interface helps to bridge the gap, bringing the reverberations and reflections together as your custom visual acoustic environment. In turns the presets allow for an easier understanding of the fine tunings of the plug-in that can eventually impart on a track some very professional sounding reverb. The manual for TrueVerb, as with all of the other Waves plug-ins I have used is well indexed and helpful.

Running in Ableton Live 8 on my MacBook Pro with a 2.7Ghz Intel Core i7 processor and 4GBs of RAM, Waves' TrueVerb is as smooth as clockwork, but worry not Windows users as this plug-in is cross compatible. Being fairly light with regards to overall CPU usage, it is stable and reliable even in situations where many other effects and VSTs are operating simultaneously. As far as performance is concerned, I give TrueVerb a thumbs up. Although it is not perfect for every scenario that I use reverb in, it certainly holds a high rank on my list of top Waves plug-ins and is certainly Waves' best reverb VST yet. I've had it for almost four months now and I certainly don't regret my purchase.

(contenu en anglais)
Afficher la traduction automatique
Afficher l'avis original
The Waves Ltd. True Verb is a software plug-in that emulates all sorts of reverbs.  It was a quick install and after starting to install it it only ended up taking about five minutes.  I didn't have any compatibility problems and the interface is easy enough to understand that it won't take too long to get accustomed to its features.  The typical functions are easy to find and the graphs show a great representation of the reverbs.  You have emulations of just about every type of reverb including hall, spring, and room.  The manual for this software is put together well and while it could be helpful, the plug-in is pretty self explanatory and isn't hard to operate without the manual.

I've never had any problems running the Waves Ltd. True Verb as it has always run pretty smoothly for me.  I am currently running the plug-in on a Mac Book Pro that has a 2.2 Ghz Intel Core 2 Duo processor and 4 GB of RAM.  I run the plug-in in Pro Tools LE 7.4 that runs off of a Digi 002R audio interface.  I have also run the plug-in on a Pro Tools HD system.  I've never had problems running this plug-in, but like I do with all reverbs, I use busing and auxiliary channels.  I place the plug-in on a stereo aux channel and send buses from the tracks to the aux channel that I want to have reverb on.  This saves processing power and will allow you to run more plug-ins at a time.  I've been using the Waves Ltd. True Verb for a few years and it has always run pretty smoothly for me, no matter what system I am running it on.

While the Waves Ltd. True Verb sounds pretty good, it sound quality doesn't really blow me away.  It is good for a few different types of reverbs and is probably best for its room reverb.  My major problem with this plug-in is that the sounds generally sound pretty digital.  They don't sound all that organic, but they do sound pretty good and are usable in most situations.  Waves is known for making good plug-ins and this will not disappoint, just know that this is a more digital sounding reverb than others out there.  The price doesn't really make up for the mediocre sound quality and for this reason I would probably look elsewhere.  However, it is great having the graphs and all of the different parameters that this offers and it is a pretty versatile plug-in.  All in all, I would check this plug-in out but I would also recommend checking out Trillium Labs Space Reveb as I think it is a superior plug-in.

(contenu en anglais)
Afficher la traduction automatique
Afficher l'avis original
With waves truverb it was a very easy installation, I had it in one of the bundle packs that I bought but I have forgot the name of it at the moment.
There was a big manual in the bundle pack but I have not gone through it as I know quite a bit about effects plug ins from some vast experience that I have had. I am sure that it is very sufficient though.
The installation was basically installing the whole bundle pack which was very easy and adding them to the vst folder of my digital audio workspace which is common for all plug in installations.
everything is pretty easy and self explanatory in my opinion. It is all really well set out and you do not really need to use anything apart from the presets given but having a nice preset tweaked to your taste is the best thing to do I must admit.

Yes everything works as it should do on my configuration which is a laptop with 4gb ram and a 1.8GHz processor.
The performance is great but running too many on my computer can cause it to lag significantly which is really annoying I must admit but creating a lot of sends is the best way to combat this problem I think.
Everything is stable unless you use too much of the plugins.
I have been using it for about 3 months now and it is a great plugin.