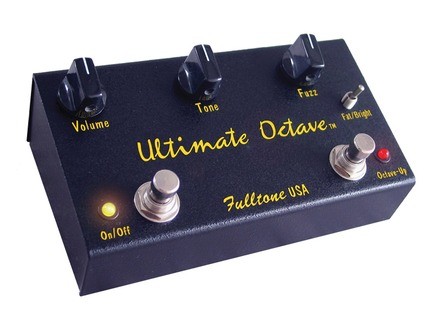 There are three knobs (volume, tone, fuzz), a toggle switch (fat/bright - it cuts or boosts the mid range), and two foot switches (on/off and octave up).

Unlike some fuzz pedals there is a jack for a 9v adapter which I believe accepts the normal Boss-style power thing.

This pedal is pretty straight-forward. Everything does what you'd expect it to do.

Let me say first that every sound you can make with the toggle switch on &quot;Bright&quot; is useless. This setting gives you a scooped mid-range, and while this would seem to be useful for certain kinds of music, particularly metal (which, I should be clear, is not my thing), I can't see even metal heads finding the sound of this pedal on &quot;Bright&quot; to be good for much. It just sounds tinny and yucky.

With the toggle switch on &quot;Fat&quot; you get two usable effects. The fuzz alone is a nice silicone transistor sound. Pretty abrasive sounding, and no, it does not clean up much at all, but this kind of buzzy distortion certainly has its honored place at the table. With the octave up feature on you get a very nice, though by no means polite, octa-fuzz type sound. Extremely biting, great for cutting through the mix, and with, at the same time, a lot of body behind it (as long as the toggle switch stays on &quot;Fat&quot

As with most octave-fuzz pedals, chords sound pretty much like a car crash, and fourths give off that weird ring-modulated sound that makes every day seem like halloween. But playing lead riffs, particularly up around the twelfth fret, gives you the searing '60s sound that you want.

It's strange, I like this pedal a lot, but I almost never use it. I feel like the only time I'd want to present my own songs with this guitar sound would be if I a) wanted to scare the crap out of people, or b) wanted them to make direct comparisons between me and Jimi Hendrix. I'm not really attracted to either of those possibilities.