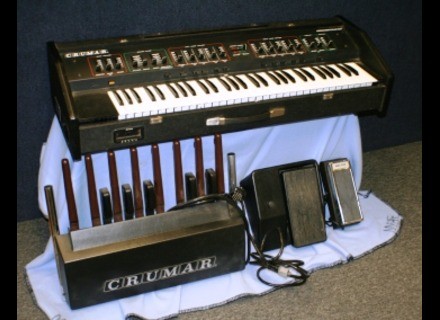 Crumar Orchestrator
5
Afficher la traduction automatique
Afficher l'avis original
The Crumar Orchestrator is a vintage analog synthesizer, designed to emulate the sound of strings and other orchestral instruments. This is a really simple synthesizer, but it’s got some really cool and interesting sounds and is very good at what it is able to do. The aim of the synth I guess was to give you the sound of a full orchestra right at your fingertips, as the five octave keyboard is split into two, making it possible to sound two different tones at once. It’s got ¼” outputs in the back, as well as a MIDI input and output. It’s also got a jack for a swell pedal, and is cased in a suitcase like casing, making it easy to hold, even though it’s pretty heavy…

The make up of the Crumar Orchestrator in terms of it’s parameters is somewhat limited compared to other synths, but it’s still possible to get a healthy amount of differing sounds here. The Orchestrator has sections for both the right and left hand, each with settings for piano, cello, violin, brass, and clavichord. It also has a filter with parameters for attack, decay, emphasis, and contour. It also has a vibrato and sustain section in addition to the master volume section. The manual would probably be hard to locate and isn’t really necessary anyway.

While the Crumar Orchestrator doesn’t sound like a real orchestra, where it does end up is somewhere in between an analog synthesizer and orchestral instruments. This makes for some really cool synth emulations of acoustic instruments. My favorite settings on here would have to be the two different strings (violin and cello) and the brass, as these sound best in synthesizer form here in my opinion. The sounds on here are definitely not suitable as a replacement for these orchestral instruments, but rather could be used to fatten up these instrument or to be their own sort of sound.