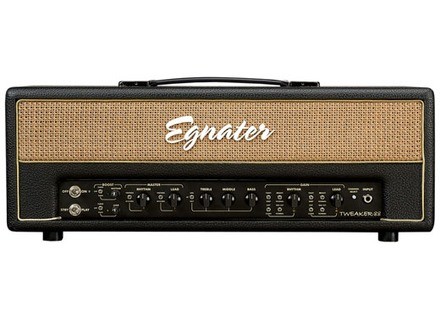 Egnater Tweaker-88
4
Afficher la traduction automatique
Afficher l'avis original
The Egnater Tweaker series was expanded recently with a 40 watt and 88 watt model. I tested all three and found that each had it's own place. The Tweaker 88 has 2 separate channels that share a global EQ section yet retain independent master volumes and assignable/foot-switchable boosts. These features make the amp essentially a 4 channel offering. A buffered effects loop is present with level selection.

The choice to go with 3 separate tube selections for each offering was a smart choice by Egnater. The Tweaker 88 is a kt88 design with two separate channels and an assignable boost that can offer added clean volume or gain. I found the layout to be more than useable with the shared EQ. The secret is in controlling the volumes and boosts and finding balance between all the sounds offered. The foot-switchable features make the amp perfectly giggable compared to the original 15 watt Tweaker model.

I played through the Tweaker 88 with a Gibson Explorer Traditional Pro. Egnater 2x12. No effects.

I found the Kt88 output tubes delivered a warmer low end presence to the sound that was missing in the 15 and 40 watt models. The clean sounds, while being fine in their own right, were the least appealing of the three amplifiers. As with all of the Tweaker amps, the guitar you choose plays a great part in the sound you get. The explorer traditional pro I chose had very high output pickups, and this made for very good high gain tones. To contrast with this, I also played through the 88 with a Gibson Les paul Traditional. The sounds with the Les Paul lacked clarity to the point of making the playing experience less enjoyable.

The Egnater Tweaker 88 is a great update to the Tweaker line. Offering more power and options for the gigging musicians while maintaining an attractive price. The amp is competitive with it's features but it's distinct tonality forces me to suggest that you try before you buy. Not everyone is going to love the sound of this amp-- or more specifically, the sound of their guitar selection through this amp.

Egnater Tweaker-88
5
Afficher la traduction automatique
Afficher l'avis original
88 watt, all tube amp head. Runs on 2 KT88 (but can use 6550) power tubes and 4 12ax7 preamp tubes. Called the tweaker cause of all the tweaking options it has. Along with 2 channels it has a 3 way switch EQ switch that changes the voicing of the 3 band EQ. USA which gives it a fender style EQ, VX which is VOX style, and Brit which is marshall. Each channel also has a vintage/modern switch which in modern boost the highs and lows slightly for a more modern sound. Along with those each channel also has an adjustable, programmable, footswitchable boost, tight/deep, mid cut/normal, clean/hot, and bright/normal switches. Those are pretty straight forward for what they do.

The manual did a great job explaining how each switch worked so there was no guessing. It setup very easily and I had no problem dialing in a great tone right away.

At first I was looking to get a Orange Tiny Terror but decided to try this out next to it. While the TT sounded great this was easily able to get a very close tone but also hundreds of other tones, while the TT is pretty much a one trick pony. The 2 channels are voiced slightly different, ones darker while the other is brighter. They're not labeled "rhythm" and "lead" cause they weren't designed that way. Both channels have equal amount of gain. So if you want the bright channel as clean and dark as gain that's your choice, same for vice versa. Really give you the chance to fully tweak your tone. You really could have 2 lead channels as well, just 2 different sounding leads.

This has a very clean tone, the KT88 tubes are almost impossible to overdrive so you can really crank it and still get pristine cleans. The lead though sounds great at low volumes. Because it's very high headroom from the tubes these amps were designed to get the tone from the preamp tubes, so low volumes vs high volumes isn't as drastic. There will still be a difference but you get great tones from low volumes because of it. The gain goes from light marshall-ish crunch to tight aggressive modern metal and everywhere in between. I can get Randy Rhoads type tone by having higher mids, set to Brit EQ, deep switch off, tight switch off, mid cut off, hot on, and mids turned up a bit. But I can also get MetallicA style tone by setting to USA EQ, tight on, deep on, mid cut on, and cutting the mids a bit. Really just too many options.

Egnater Tweaker-88
4
Afficher la traduction automatique
Afficher l'avis original
Egnater is one of those companies that has quickly climbed into one of the top positions of the amplifier building world. Their amps are highly sought after primarily due to there modules and small wattage amps. People have gone crazy over these modules in recent years and for good reason, they are very versatile and fantastic sounding. They have also done a spectacular job at designing small combo or head amp that are low wattage and excellently priced.
Features

This amp is clearly the most versatile amp for the money that I have ever come across. You get the regular rundown of EQing of bass, middle and treble. You then get in addition to that a tight and deep switch for adding better low end or just tightening it up a bit. Then you get a normal or bright switch which adds about 5 db to the volume of the amp. Next you have clean or hot switch which adds about 8 db's to the volume of the amp. Then you have a mini switch that changes the voicing of the amp. You have three modes for this operation.

You have a US mode for Fender like tones, then you have a Ac setting, and finally a British setting for the higher gain mode. The finally you have a mini switch for vintage and modern voicing. So the tonal versatility of this amp is just endless. you can find anything you are looking for with this amp. The only thing that is missing is the presences control knob. That would have just set it all off.


At new these amps come in at around $899, which is just a plain stupidly low price. I can't believe they are selling it for that low of a price. This is an amp that is great for the money and being a multi-channel this i a great amp. You can't get a lot for this kind of money but this is a great amp.