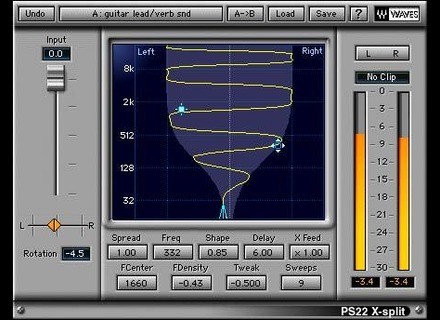 Waves PS22
4
Afficher la traduction automatique
Afficher l'avis original
The Waves Ltd. PS22 is a mono to stereo emulation plug-in, giving you the ability to take mono tracks and split them into a stereo spread. It's only available for TDM/HD systems for whatever reason. It's got three components to it - the PS22-Spread, PS22-Split, and PS22-XSplit. One of it's primary uses is for restoring old recordings, but it's also great for simply taking a mono track and make it more spatial in a stereo spread rather than just copying the track and panning the two. I don't own the plug-in at home, but have used it when I need it at the studio where I work, as you can process things with it and it's good to go once you do so. There's a lot of ways you can affect the sound, as it's got a slew of parameters within the three different components of this plug-in. However, I usually just use it for it's basic features. I haven't checked out the manual for this plug-in, nor do I anticipate needing to look at one.

The studio I work at has the Waves Ltd. PS22 plug-in running on all of their systems. I've used it to do one time processing mostly for making a mono track into true stereo. It's a Pro Tools HD system with a MacPro computer that has dual 2.66 Ghz Intel Xeon processors and 10 GB of RAM. Since I've used it as an Audio Suite to process, it doesn't take up much processing power since it's just a one time thing. Either way, most systems should be able to handle running this plug-in without any problems.

The Waves Ltd. PS22 is a great utility plug-in to have around and is one that comes in pretty much all of the major TDM plug-in bundles. You can't get it for LE systems or something similar, although I'm not 100% sure why. Even though I can't have it at home on my Pro Tools 9 system, I use it when I need it at the professional studio that I work at. You'd be surprised how useful something like this can be, and I don't know of any other plug-ins out there that will do this. I don't know if you can buy it individually, but if you have a Pro Tools HD system with just about any Waves bundle you'll have it. Of course it's not really worth it to buy a full bundle just for this, but the PS22 is a great addition to have and should be explored by everyone who has one of these bundles.
Le Waves Ltd PS22 est un mono à l'émulation stéréo plug-in, vous donnant la possibilité de prendre pistes mono et les diviser en une diffusion stéréo. C'est seulement disponible pour TDM / HD systèmes pour une raison quelconque. Il a trois composantes à elle - la PS22-Spread, PS22-Split, et PS22-XSplit. Une de ses principales utilisations est pour la restauration de vieux enregistrements, mais il est également idéal pour simplement prendre une piste mono et le rendre plus spatiale dans une diffusion stéréo plutôt que simplement copier la piste et de panoramique des deux. Je ne possède pas le plug-in à la maison, mais l'ont utilisée quand j'en ai besoin dans le studio où je travaille, que vous pouvez traiter les choses avec elle et il est bon d'aller une fois que vous faire. Il ya beaucoup de façons dont vous pouvez affecter le son, car il a un grand nombre de paramètres dans les trois différentes composantes de ce plug-in. Cependant, j'ai l'habitude de simplement l'utiliser pour ses fonctions de base. Je n'ai pas vérifié sur le manuel de ce plug-in, je ne prévoient avoir besoin de regarder un.

Waves PS22
4
Afficher la traduction automatique
Afficher l'avis original
Stereo spreaders used to be all the rage back in the day. Today, they're not utilized nearly as much thanks to you being able to easily do it inside of the DAW with very minimal effort. Most people also agree that two separate panned performances are better, assuming that it's possible. For those who just want to use a plugin to achieve that stereo effect, they have plugins like this here. It has adjustments for input gain, width, rotation, spread, frequency, shape, delay, xfeed, lfspread, fcenter, fdensity, tweak, sweeps, has left and right monitoring and a few other things. To enable this, simply enable it on whatever buss you want to have that stereo effect. I never read the manual, but it shouldn't really be needed. This is a fairly simple plugin to use.

Waves rules for audio plugins. For one, they're always rock solid and super stable. I've never had a single crash while using any Waves plugin, and the same goes for this. The plugin itself doesn't take up much RAM or processing power, which is a big plus for those who tend to have tons of plugins going on inside of their DAWs. The plugin is also cross platform compatible, so just about anybody can use this without any issues at all. There is one issue that I did experience, and that has to do with the actual coding of the plugin and today's recent OSes/DAWs. The plugin is a 32 bit plugin. However, my DAW and OS are 64 bit OSes. For Logic Pro, my go-to DAW, to utilize this, it needs to run a special bridge application. However, I'm not a huge fan of the way Logic implements that feature. I'm hoping that Waves updates these to 64 bit in the future. I've been using the Waves Mercury bundle for the past half a year or so, and it's been absolutely killer.