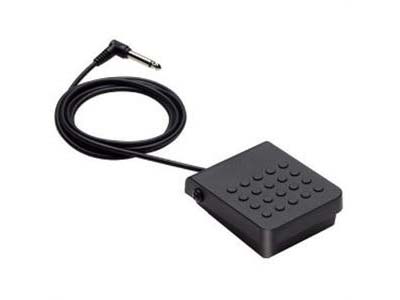 (contenu en anglais)
Afficher la traduction automatique
Afficher l'avis original
The Casio SP-3 is a basic sustain pedal that came shipped with my Casio 88-key digital piano. Unlike most regular sustain pedals that are actually shaped like a real piano pedal. the Casio SP-3 is shaped more like a multi-function footswitch, which makes it unusual to step on at times, but it also makes it useful for other controlling uses beyond a digital piano or keyboard. One of the strangest things about the SP-3 is that it works both right side up and up-side down. In fact, it's hard to tell which side is supposed to be on top, and which is on bottom. To this day, I still can't figured out if I'm using the pedal correctly. One side is rubber, with a bunch of little triangle shapes formed from the rubber. The other side is plastic, with a bunch of raised dots, in a grid fashion. I believe the plastic side is supposed to be the top, because the rubber side isn't a stiff and rigid to be stepped on repeatedly. But the pedal functions pretty well on both sides, and depending on what floor you have, either side may work, and one side may work better than the other.