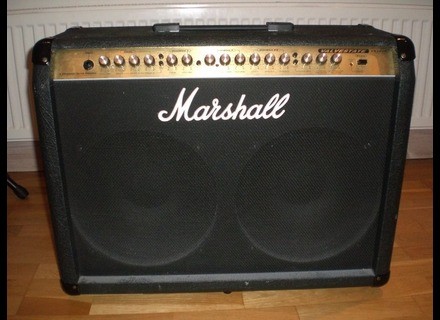 Voir les autres avis sur ce produit :
Afficher la traduction automatique
Afficher l'avis original
These amps pretty much sound like crap. They have a preamp tube and no power tubes. So the back end section which is the power section is still solid state. This means that they went a cheap way of getting you a "tube amp" and no real change in tone. Most of the feel and tone of a tube amp comes from the power section.

These amps cam in different formats with wattage and different size combos, but note of them sounded worth playing in front of people with. They have a tube voicing but the overall feel and the most important thing, well it just doesn't feel like a tube amp.

This is the 100 watt version with a single one 12 inch speaker. Same lame tone a the rest of these amps in this series, but now you have 100 watts of it blaring through a single speaker.

* 100 Watt Valvestate power stage driving 1x12''
* ECC83 [12ax7] Pre-amp valve active on all 3 channels.
* 3 independent footswitchable channels, 'Clean', 'Overdrive 1' and 'Overdrive 2'.
* Clean channel with Treble, Middle and Bass controls, plus Tone Shift switch for extra tonal options.
* Overdrive 1 channel with its own Gain and Volume plus shared EQ with Overdrive 2.
* Overdrive 2 channel with its own Gain, Volume and sweeping Contour control.
* Power Dimension switch to give the effect of the greater saturation of a valve power stage of lower wattage being driven hard.
* Built-in spring Reverb with separate level controls for the Clean and Overdrive 1/2.
* Effects Loop with front panel Mix control.
* Headphone jack [which mutes the internal speaker].
* Line Out jack with Speaker Emulation for connection to external equipment.
* Extension speaker jacks

Marshall's sound their best with a Gibson guitar. Well at least that is my personally favorite sound with these amps. Whether that be a Gibson Les Paul or an SG these amps just come to life when a Gibson is played through one of them. These two instrments just have a connection that get bigeger and better when coupled together.

I also like the way a Fender Stratocster sounds through this amp. Even though it is solid state it does have a decent enough tone for practicing at home or in an office. This isn't an amp I would ever take on stage but it will do behind the scenes.

These amps have been fizzled out of production. So the used market is the only way to go at this point. I have seen then for around the $300 for a used one. Not a bad price for this amp but not worth the money in the long run.