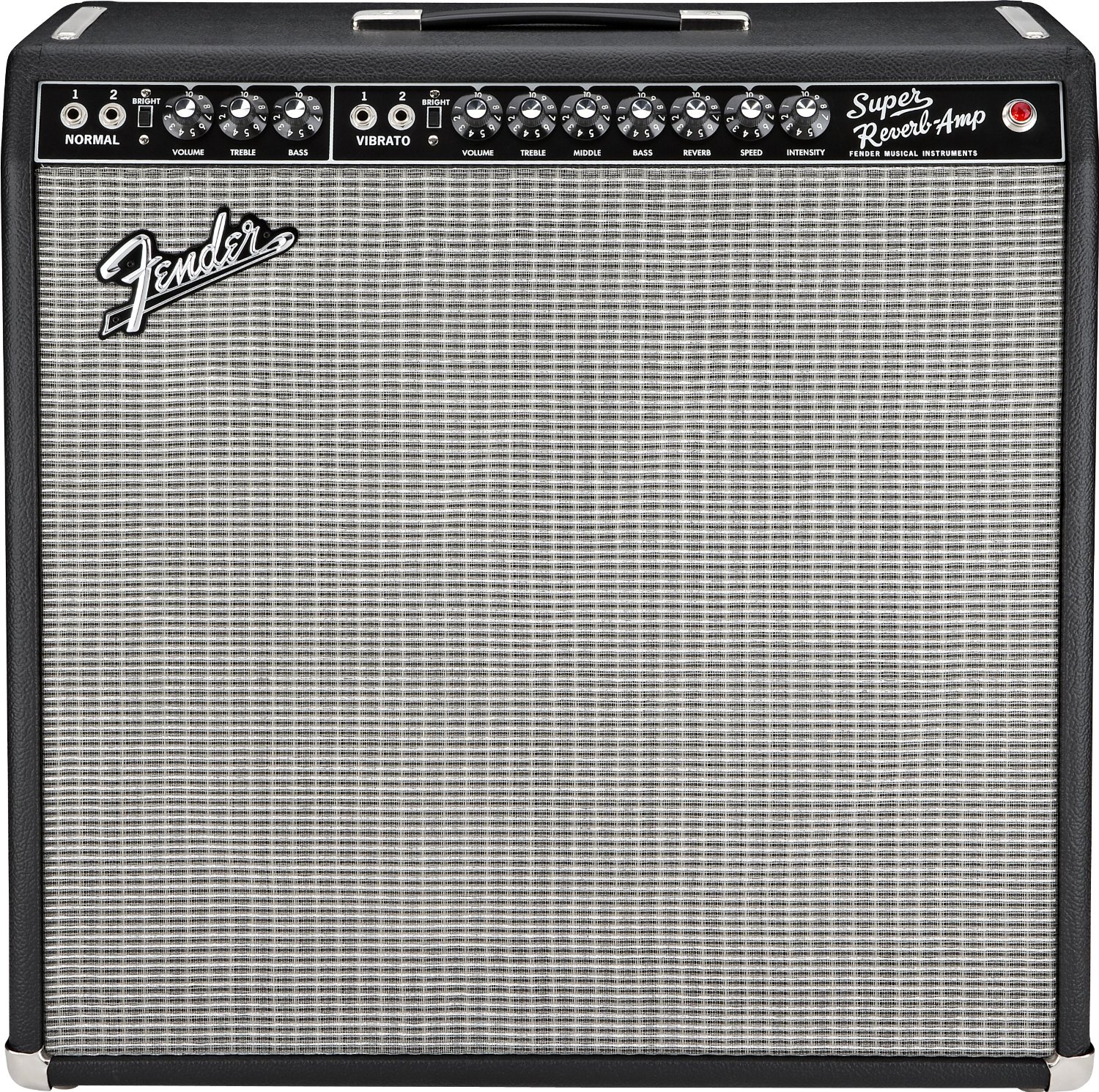 (contenu en anglais)
Afficher la traduction automatique
Afficher l'avis original
The '65 Fender Super Reverb reissue carries on the tradition of great remakes of classic "blackface" Fender amps, which many consider to be the company's finest hour of tone crafting. This amp takes a cue from the original Bassman amplifier and used 4 10" Jensens. It puts out about 45 watts of power, making it about medium wattage when compared to Fender's other amps in this series. It has the standard Fender layout of two channels. The normal channel has the volume, bass, and treble setup, and the vibrato channel (accessed by a separate input) has those same controls, but augmented by a middle control in the tonestack, as well as controls for reverb, and vibrato (speed and intensity). Otherwise there is no other channel switching or effects. Just like the classics.

Getting a good sound out of this amp is pretty simple. It's a bit of a middle ground between the Deluxe and Twin. It doesn't require the ear splitting volumes of the Twin, but it's also not going to be nearly as quiet as the Deluxe reissue either. It's a great amp for gigging or jamming, but you still should take into account the need for at least a bit of volume. The tonestack responds like you would expect a Fender to (very simple control layout = simple tonal tweaking) so there's no surprises there. The onboard reverb and vibrato sound killer as with all the Vintage Reissue amps that use these features.

The Super Reverb offers a bit of a different twist on the classic Fender tone to my ears. Since most of the classic blackface amps of a higher wattage are using two 12s you're really only getting variations on that sound. However, the 4 10" drivers really offer something different to my ears. The core tone is still the typical Fender sound, but it's a bit sweeter sounding overall (not quite as bright as something like a Twin) and has a bit more natural compression. Also, having the 4 ten inch speakers really offer a little more of a thicker sound that projects out a little bit better to my ears because you're getting more height and lift from the speakers. Definitely an excellent compliment to the line.

(contenu en anglais)
Afficher la traduction automatique
Afficher l'avis original
The Super Reverb '65 is a reissue of Fender's legendary 4x10 blackface combo, often considered the mid-sixties to the legendary late-fifties Bassman. It is an all-tube amplifier, running a bunch of pre-amp tubes (mostly 12AX7s) a pair of 6L6GCs in the power section, and a single 5AR4 rectifier tube. It's rated at 45 watts.

There are two non-switchable channels: &quot;normal&quot; and &quot;vibrato.&quot; The normal channel features a bright switch, a volume control, and treble and bass controls. The more elaborate vibrato channel also has the bright switch and volume knobs, but it steps up to three band eq (treble, middle, and bass). It also features reverb (with one knob) and vibrato (with controls for speed and depth), both of which are accessible only when using channel two. Each channel has two inputs, with the second one being padded a bit, allowing you to get a cleaner sound when using high-output pickups. There is a retro-style two-button foot switch which controls reverb and vibrato.

The one major difference between this reissue and the original blackface Super Reverb is that the reissue uses a printed circuit board, while the original used a hand-soldered tag board. The latter allows for much easier repairs and mods, and many people argue that it sounds better, too.

This is a classic non-master-volume amp. The three-band eq on the vibrato channel is extremely easy to use, allowing more flexibility than many more complicated eqs because the three bands cover the entire sonic spectrum. With all three knobs at zero no sound gets through; with all three knobs at ten you get a significant boost in signal being passed from the pre-amp to the power amp. With all three knobs at five you get a lush and detailed picture of what your guitar actually sounds like. Usually the best way to get the sound you want is to put all the knobs on five and then turn one of them down a notch or two. The bright switch is there essentially to compensate for the differences in tone between single coil and humbucking pickups.

The clean sound on this amp is heavenly! Extremely well suited to jazz or clean-guitar rock. Maybe country, too. The clean sound of a Fender blackface is desirable enough that other companies make pedals emulating it, and this amp delivers exactly what those pedals try, and usually fail, to approximate.

One thing to consider, though, is that the amp only stays clean until the volume knob reaches about four, after which you get a distortion sound that is great for blues and classic rock, but less great for other types of music (I play indie rock). The amp is loud enough that in practice, or in a small room, or with a quiet drummer, the clean sound is more than loud enough. But if your drummer is loud, or you're playing a medium-sized club, you will get significant distortion before you get loud enough. This might be a problem, because the clean sound is where this amp really shines. I give it a perfect 10 for clean, a 6 for distorted tone, and a point off for failing to deliver the clean tone at big-club volume levels.

I used this amp for about five years, and only parted with it to trade up to a real early-seventies Super. It was my only amp during that time and I used it at practice, club gigs, and recording. It was great in every one of those situations as long as 1) I got my distortion tone primarily from a good pedal, and 2) the drummer was not so loud that I had to turn the thing up past four to be heard.

In spite of these limitations, I'd recommend this amp to anyone who wanted to buy a Fender amp currently in production. The clean sound and the reverb are as good as any I have ever heard anywhere, and it's rare that you face a situation where the amp is too quiet and yet can't be mic'd. Most places that are big enough to overpower this amp assume they're going to be micing the guitar amps anyway.