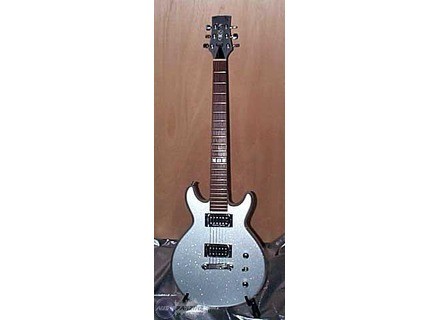 Jackson JJ1 Scott Ian
4
Afficher la traduction automatique
Afficher l'avis original
This was one of Scott Ian's first signature guitars he ever had, and it was a bit of a mixed bag, in my opinion. It didn't seem to be well received, and they never sold a lot of these in my shop. We never stocked them because of that, so maybe it was a bit of a catch 22 there. The guitar features a mahogany body, a maple neck with a rosewood fretboard, 22 fets with a unique inlay, a hard tail bridge, two humbuckers, one volume, one tone and a three way switch.

The guitar was perfect in terms of weight. It was a real light 7 lb guitar, and it was a joy to play. I'm not a huge fan of the way these look, to be honest. However, there's no denying the quality of this guitar. The guitar had some great fretwork, although there were a few spots at the first few frets where it was starting to wear. This is pretty normal for used guitars, so that's to be expected. Rosewood was nice and dark, and it looked great with the body color. The hard tail bridge I'm not a huge fan of. I tend to prefer the vibrato bridge version, but that's just me. The rest of the guitar was top notch without any issues.

The guitar had a Seymour Duncan JB in the bridge and a Seymour Duncan Jazz in the neck. The JB in the bridge is pretty much the go-to pickup for nearly every guitarist today. Almost everyone out there has played this pickup, and there's a reason that it's installed in so many guitars. It's not the best pickup out there, but it does so many geners well that it's hard to truly hate on. The mahogany body helps keep the "stringy" treble from getting out of hand, too. The Jazz in the neck works awesome for clean tones, and it's pretty good for leads, but I tend to prefer the 59 in the neck instead.