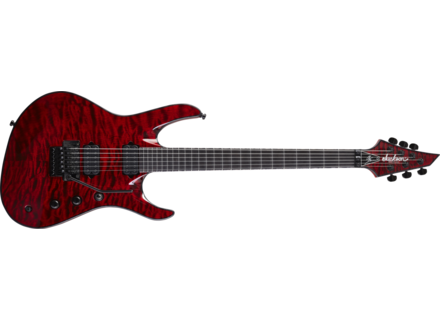 Jackson USA Signature Chris Broderick Soloist 6
5
Afficher la traduction automatique
Afficher l'avis original
Chris Broderick was formerly known to play Ibanez guitars, but ever since a little issue that occurred with a Japanese business spec'ing Ibanez guitars to his specs and not allowing him to have a signature model, he decided to leave for Jackson. The guitar features a mahogany body with a quilted maple top, a neck-thru maple neck design, an ebony fretboard with 24 extra jumbo frets, no inlays, locking tuners, a special low profile floyd rose, two humbuckers, one volume, one tone, one kill switch and a three way switch.

Pretty much everything about this guitar is perfect. The first thing you notice is that the quilt on this looks very sick. It has this depth to it that is hard to truly see when photographed. I might as well start off with the things I didn't like about this as they're real minor. I wasn't a huge fan of the way the volume and tone were close together, but it's such a minor thing that it's pretty much a non-issue. I also didn't like this floyd as much as the original floyd rose, but this is still a very high quality bridge. The rest of the guitar is perfect. Everything you want regarding a guitar is in this. The biggest issue is the actual price itself.

I believe this guitar states that it has custom DiMarzio pickups in it. Broderick used to be a Bareknuckle pickups player before he switched to DiMarzio. Both companies are great and offer very cool pickups. I think Bareknuckles have a bit of an edge on DiMarzios, but DiMarzios are no slouch either. When he switched over, he went with the D-Activator pickups. I'm pretty sure these are basically the same as those, if maybe tweaked ever so slightly. They really sound similar to my ears. The bridge is very tight and has a cool, almost active like sound with a passive feel. The neck can do some real cool shred lead lines, but I kind of wish it was a bit fatter. The guitar was super resonant, though.

Jackson USA Signature Chris Broderick Soloist 6
5
Afficher la traduction automatique
Afficher l'avis original
Chris Broderick is an all around cool guy. He has played guitar for Nevermore and is currently the lead player for Megadeth. He use to play Ibanez guitars. He is primariliy a 7 string player but with Megadeth he is back rocking the 6's. He has left Ibanez and is now supporting Jackson and Jackson has given him a signature model with all his individual preferred specs. The base specs are not too unusual for a Jackson. The guitar has neck through construction with a mahogany body with a quilted maple top and a maple neck with an ebony fretboard. The fretboard is free of any inlays and has 24 jumbo stainless steel frets. Up top on the 3x3 headstock you get a set of Planetwaves trimlock tuners that are locking and trim the string ends. You get a locking nut to go with the low profile Floyd Rose. The pickups are a set of custom Dimarzios specially voiced for this guitar. The controls are pretty creative. There is a 3 way toggle that is horizontal so it is kind of like a 3 way blade. The neck controls is a volume knob that was a push pull function for coil splitting. The next knob is a tone knob that has a push pull function to take it out of the circuit kind of like a no load tone knob. The next switch is just a kill switch. The Output jack is facing upwards so you can easily wrap your cable around your strap to keep it from coming out.

You can really tell that Broderick had a lot of input on this guitar. It has a lot of unique features that lots of people wish they have on their guitar. The stainless steel frets are nice and smooth. There are tall and narrow and give a great feeling. The trimlock tuners are very nice. Every guitar should have locking tuners and having some that cut the string ends off the string is a bonus. The low profile tremolo is pretty nice. I am not a big tremolo user but it feels like a high quality unit. The push pull tone knob is pretty cool. It is great that you can take it out of the circuit when you want a wide open sound but its still there if you need to dial off some tone for a clean or lead tone. The guitar balances perfectly. The body has a slightly offset design to it and the strap peg is raised from where it would normally be so the guitar naturally sits in a balanced classical position when you are standing up.

These custom Dimarzios have a real high end bite to them. They sound almost like active pickups. They seem pretty close to the Dimarzio D-Activator pickups which are designed to sound like actives. Broderick use to use Bareknuckle pickups. I wish he had stuck with those in his Jackson. I guess Jackson wanted him to use a more mainstream pickup maker for his signature model. The Bridge pickup in this guitar is super tight and has a nice grind to it. Almost like a passive 81. It doesnt clean up that well but you can make it work with a bit of tone knob action. The neck pickup has a bit of grind as well, almost too much for me. Broderick is so smooth in his lead playing he can get away with having a lot of edge in his lead tone. Most people would need a smoother lead pickup to sound good. This neck pickup will force you to be smoother.