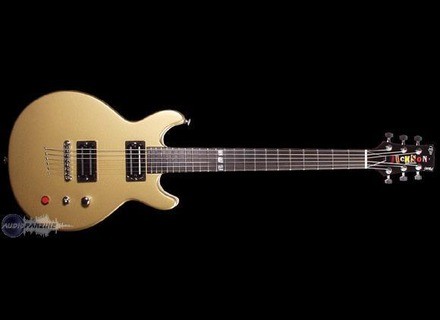 Jackson JJ2 Scott Ian
4
Afficher la traduction automatique
Afficher l'avis original
This guitar is much the same as the previous ones. The main thing that makes this special is the mahogany neck-thru design instead of the maple bolt-on neck. On top of that, this has a special kill switch installed on it for some crazy effects. The guitar features a mahogany body, a mahogany neck with an ebony fretboard, special 12th fret inlay, a hard tail bridge, two humbuckers, one volume, one three way switch.

The mahogany neck-thru design and mahogany body were surprisingly light. Compared to the JJ1W I played before it, this was a much more balanced instrument. The mahogany neck felt awesome, and it had this almost raw feel to it. The neck wasn't super thin, but it wasn't super thick, either. It was somewhere in the middle, in my opinion. The kill switch that was on this allows you to get all kinds of crazy effects with it, and right now, I'm sure most people can relate to Buckethead using it for some unique effects. I think kill switches are a bit of a waste, usually. One cool thing you can do if you have a two volume knob equipped guitar is just turn one volume knob on 0 and the other on 10. Then swap between pickups with the pickup selector. You'll get the same effect going on.

The guitar was very resonant compared to some of the other JJs that I've played before. Everything seemed to really click, in my opinion. The guitar had the two Scott Ian pickups installed in it, and they were flame throwers. They were super high output, and they really slammed the amp. They had a strong bass, fairly flat mids and a slight dip in the treble with this guitar. I was able to do some crushing rhythms in E without any issues at all, but I wonder how they'd be tuned down with this body configuration. The neck was a bit too high output for me, and I wasn't a huge fan, but it's not too bad.