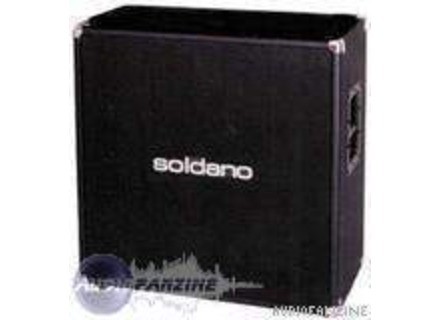 Soldano 4x12 Standard Straight
5
Afficher la traduction automatique
Afficher l'avis original
I purchased this cabinet with my Soldano Atomic 16 head for 1k. Overall, this is a great speaker cabinet. You don't see these pop up too often on the used market. But, when they do they tend to go for relatively low prices.

The speakers are also front loaded, which makes swapping speakers pretty easy. You just take off the grill cloth and frame which is actually attached with some very strong velcro. Super convenient! I've heard front loaded cabs are actually a lot punchier than rear loaded ones, but I haven't really noticed anything too convincing. Probably the best part about the cab, are the custom X12000 speakers made by Eminence. They are like Vintage 30's without the mid spike. Sometimes, they can sound almost too smooth. I might drop in a pair of V30's just to even them out.