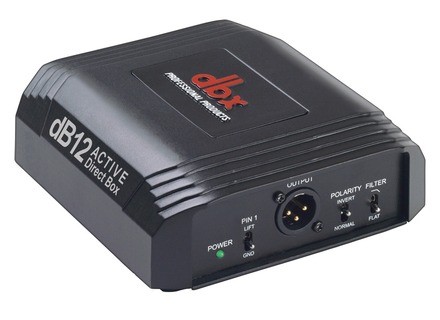 dbx dB12
4
Afficher la traduction automatique
Afficher l'avis original
The DBX DB12 is an active direct input box that can be used either in the studio or on the stage. I've only used the box in the studio, so this review will be focusing on this application of the device. The box has 1/4" connections for input and thru on one end, and an XLR output on the other end. It isn't rack mountable as it's a box that is designed to be easily moved around when needed.

There isn't anything difficult about using the DBX DB12, as everything on here is pretty self explanatory. Having said this, it does offer some features not normally found on a DI box, which is definitely something that I welcome. The box has switches for ground lift, polarity, a low pass filter, and a pad that can be set at either 0 db, 20 db or 40 db. A manual shouldn't be necessary, although I have not seen it so I can't speak to it's make up.

The sound of the DBX DB12 is quite transparent and it will definitely give you an accurate sound of what you send to it. It isn't going to color your sound, as it's strictly a messenger of information. It's nice that there are a number of parameters and features to use here, as it only extends the versatility of the DB12. I don't know that this sounds better than many of the other DI boxes that I've used out there that are cheaper, but I guess you're paying for the extra features with the DB12.

While the DBX DB12 is more than a solid direct input box, I'm not convinced that it would be my first choice if I were to need a new DI box tomorrow. While it's certainly sturdy and built well, the price is just a bit much for what you're getting here. Don't get me wrong - I love having the extra switches and features here, but without a real increase in sound quality when compared to other DI boxes like the Countryman DI, it's not worth the price for me. I'd still encourage those interested in a new DI box to check out the DBX DB12, but also check out those like the Countryman and others out there in the price range...
Le DB12 DBX est une boîte de direct active qui peut être utilisé soit en studio ou sur scène. J'ai seulement utilisé la boîte en studio, donc cet examen sera axé sur la demande de l'appareil. La boîte a 1 / 4 "connexions pour l'entrée et à travers sur une extrémité, et une sortie XLR à l'autre bout. Il n'est pas montable en rack que c'est une boîte qui est conçu pour être facilement déplacé autour si nécessaire.