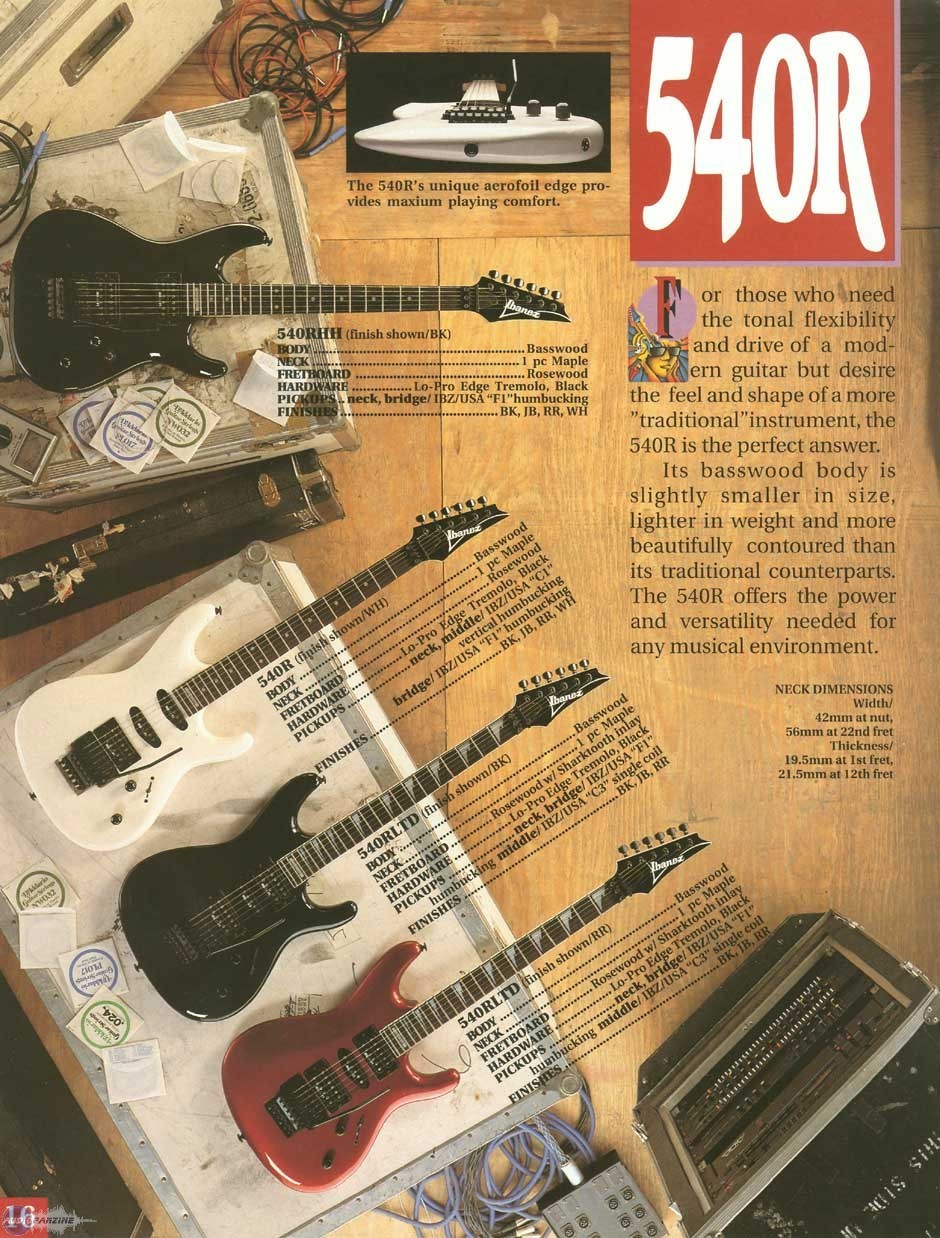 (contenu en anglais)
Afficher la traduction automatique
Afficher l'avis original
This guitar was built in Japan in the late eighties. It was painted in a colour called "Shocking Pink," which is an extremely radiant and bright finish. The features are pretty standard for most Ibanez superstrat, which are as follows:

It's got a pretty diverse set of tones going on despite its looks thanks to the HSS pickup configuration coupled with a 5 way switch. The single coils were nice and spanky at times... quite like a nice Strat, and the humbucker had a nice raunchy L.A vibe to it. The overall feel and vibe of the guitar was definitely more "vintage" than my '91 RG550. The neck was thicker and the body felt more classic than the RGs.

Oh, and it's PINK.... REALLY PINK! Beware, you will want to bust out the spandex and Aqua Net when you pick up one of these!

Like I stated above... the guitar has a bit more of a vintage vibe than the '91 RG550 that I bought around the same time period. The Radius body shape is a fairly different thing for Ibanez compared to the RG... and I found that it was more ergonomic. It was a bit on the heavier side compared to my 550 but I found that it balanced a bit better and was far more enjoyable to play. It doesn't quite have the upper fret access of the RGs but it's still quite good. This guitar was made before the AANJ neck heel, so it uses the 4 bolt neckplate system with a contoured heel. I had no problem with getting to the higher frets whatsoever even though it was only 22 frets.

When I got the guitar it had been sitting dormant for quite some time... but surprisingly the setup was remarkable. I popped a new set of 9s on it and it was good to go without problems. The action was dead low and there was no buzz. I was able to bend up to 2 or 2.5 steps without issue (except when strings broke from being stretched.) The Ibanez guitars I've had have all had pretty killer playability despite the conditions I found them in and this one was no exception. It was easy to play and easy to dial in tones as well.

When I got this guitar, I was using a rig centered around a Mesa Boogie Studio Preamp. The tones I conjured up were very eighties in nature. The single coils had a bit of that old school Stratty chime... but it wasn't nearly as apparent at higher volumes. The humbucker was a great L.A rock pickup... though I found it to be a bit buzzy at higher volumes. I would have liked to put some DiMarzios or something in there just to try them... but it never happened. I later bought a USA Charvel San Dimas and the two guitars played tag team for a while... the Charvel was rawer and more vintage, the Ibanez more of that L.A processed eighties vibe.

For what it's worth, I sold the guitar after a few months and it came into the hands of a friend of mine who replaced the pickups with DiMarzios... it is a MARKED improvement over stock. All in all, I'd say that it was a great sounding guitar for that classic L.A vibe, especially when paired with the right amp... but it really wasn't a very "pure" sounding guitar. That being said... I never would have used it for much other than the L.A rock thing based on the colour... so I guess that's a bit irrelevant. It's an eighties guitar and does it well... so that's what I'm basing my rating off of.

When I got this guitar... someone brought it into the store where I work looking for an appraisal and to possibly sell it. When they pulled it out of the case... I knew that it would be coming home with me. It's definitely a 'dated' guitar, but that's the whole charm of the thing! It made me bust out the classic eighties garb for a while (for laughs, mainly) and it certainly raised some eyebrows whenever I took it out and about. Looks aside, these old Ibanez's are great guitars... well crafted and GREAT players. This one is nice because of the slightly more vintage feel compared to the RG. The Radius later served as the basis for the Joe Satriani signature model... which Joe touts as more of a vintage type guitar. Paul Gilbert also used an identical 540R during his Racer X days as well.

All in all, if you're interested in reliving the eighties, this is definitely one of the best ways to go. Sure it's a bit dated sounding and the pickups may not be the best... but it's a great playing and feeling guitar that is 'shocking' enough to catch the eye.
Cette guitare a été construit au Japon dans les années quatre-vingt de retard. Il a été peint dans une couleur appelée «Shocking Pink», qui est d'une finition extrêmement radieux et brillant. Les caractéristiques sont assez standard pour la plupart des Ibanez superstrat, qui sont comme suit: