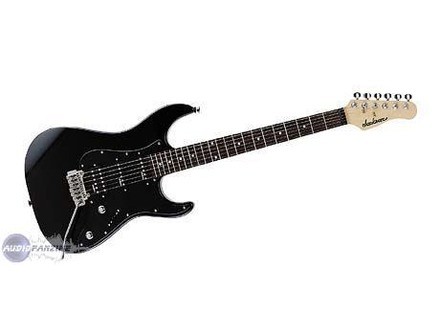 Jackson PS7 Dinky
3
Afficher la traduction automatique
Afficher l'avis original
The Performer Series guitars are meant for those who are on a budget and need something fairly cheap. This is very similar to the PS2, except this model has a normal two point tremolo instead of the floyd rose. The guitar has the following features:

I'll start off with the good stuff first -- the bridge on this isn't too bad. It's like a Wilkinson or something, and it performed quite nicely. However, that's about the only good thing I can say about it. The edges on the frets were sharp, and you noticed it every time you moved your hand up and down the neck. The frets needed to be leveled better as there were dead spots. The nut on this was also cut too deep. It needed a new replacement nut as I don't think you could build it up with epoxy and refile it. I wouldn't waste my time doing that, at least. It's easier to just make a new one considering how worn this was.

The guitar sounded pretty bland overall. First of all, it didn't resonate all that great. That could be why it didn't sound too spectacular. The bridge pickup sounded pretty bland once you started adding some gain. Basically, it was undefined and almost muffled sounding. I checked to make sure the tone pot was all the way up, and it was... The neck and middle pickups were decent, but they were nothing really spectacular. They were average at best, and they seemed to not be able to handle high gain like the bridge pickup (kinda) could.