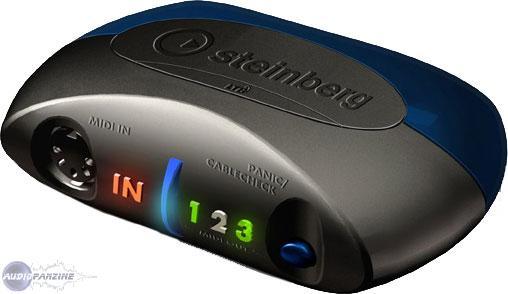 (contenu en anglais)
Afficher la traduction automatique
Afficher l'avis original
The Steinberg Midex 3 is a simple MIDI interface that is USB based. It's compatible for both Apple and PC operating systems - I used to use it with my PC based system a number of years ago. It's got one MIDI input and three MIDI outputs and is ideal for use in a small home studio where you simply want to send MIDI information to your DAW, or at least that's what I was using it for. I didn't own this MIDI interface but a good musician friend of my owned it and he let me borrow it a lot whenever I was looking to hook up my keyboard to my DAW. It's a pretty simple plug and play interface, as you just need to install a driver if you're using it on a PC. Beyond this there isn't much you need to do in order to get it up and running.

Once you've set up the Steinberg Midex 3, there isn't anything that you really need to do in order to use it. I haven't used this MIDI interface in years ever since I made the switch from Cubase SX on a PC to Pro Tools on a Mac, but when I was using it in Cubase, it was mostly in SX 2.0 and later in 3. The computer I was running it with was a Hewlett Packard Pavilion dv8000 lap top that had 2 GB of RAM and a single 3.0 Ghz processor. I used it mostly with a simple Yamaha keyboard that had MIDI ports, but also with a few other keyboards here and there as needed. I never had any troubles running a MIDI keyboard with this interface, which is the extent of how I used the interface. This is kind of outdated for modern MIDI interfaces, but should still get the job done for simple MIDI I/O.