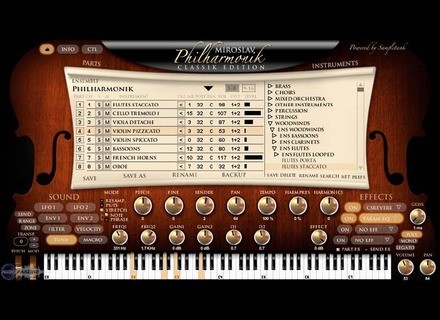 IK Multimedia Miroslav Philharmonik Classik Edition
5
Afficher la traduction automatique
Afficher l'avis original
I have been using many plug-ins and synths from IK Multimedia over the years and Miroslav Philharmonik Classik is one of my favorites. It does take up a lot of your computers CPU though so you will need to have at least about 2 GB of RAM. I am running it on Vista and it works great, I have also ran it on Windows XP and it did not run as fast but it didn’t crash or cause any problems. You do not have to use it has a VST if you don’t want to. It can also be used as a stand alone application.

The acoustic instruments are what stand out the most to me, it just seems like they are professionally done and very real. The brass and woodwind instruments are perfect and I use them a lot. You do not even have to worry about panning or adding life to the instruments because there is a function that will automatically dial up the settings and turn you into a symphony instantly.

For this price, you could not expect anything better. The brass and woodwinds of this plug-in are way better than the brass and woodwind packs you can get from Native Instruments and they cost about the same price.
If you are not a preset kind of musician than Philharmonik Classik still gives you full control to add effects to each individual element, there are about 20 different effects that you can use as a master for the instruments that you choose.
This software runs smoothly and has not given me any issues. You can use it simultaneously many times and it will work great as long as you computer can handle that work load. If your computer is an older computer I would not purchase this because you will not be able to use all of its functions the way you want to without your computer getting slow.

IK Multimedia Miroslav Philharmonik Classik Edition
4
Afficher la traduction automatique
Afficher l'avis original
IK Multimedia has released an orchestral synth called IK Multimedia Miroslav Philharmonik Classik Edition. It's based off of the Miroslav Orchestral and Choir. The plugin itself is just like any other plugin in that it loads in your favorite DAW either stand-alone or using some sort of wrapper. The program itself is very easy to use, and there are some pretty nice orchestral pieces to choose from. I had no issues creating a very power metal-esque style of music. Think of something like Rhapsody of Fire, and you'll know what I'm referring to. The samples themselves sound fairly solid, and I'd rate them higher than the built-in Logic stuff that I normally use. That said, there are other programs out there that are better, in my opinion.

IK Multimedia is pretty well known for being a good company when it comes to performance and stability. While I have experienced some crashes with other programs of theirs, this one seemed to be rock solid. There was no major lag when loading certain presets, and even when I started adding about six or so of these VSTs in the application, it didn't hiccup one bit. It doesn't take up a ton of RAM, and that's a good thing. In a world where RAM and performance mean everything, IK Multimedia delivered. I have never read the manual, so I can't comment on anything regarding how nicely their stuff is written, but I can say that this really doesn't need a manual.