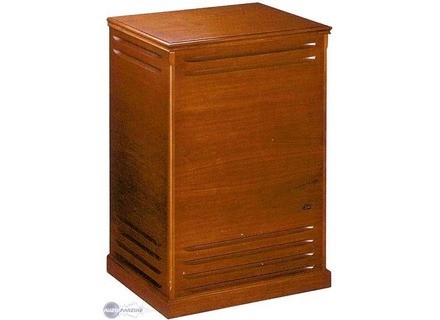 Leslie 122
5
Afficher la traduction automatique
Afficher l'avis original
The Leslie 122 is a speaker cabinet that is to be used with an organ. Specifically, I've used the Leslie 122 rotating speaker cabinet with a Hammond M3 organ. There aren't very many characteristics to the 122 that I know about, as it is a pretty straight forward Leslie speaker cabinet. You can only connect it to a organ, as it doesn't have a preamp to support anything else, although you can certainly get it modded to use it with an electric guitar...

You don't need to do anything except hook up the Leslie 122 to your organ of choice to use it, as there isn't anything you can do to change the sound or anything. All of that is done within your organ, including turning on and off the rotating speaker. I don't know anything about the manual for the 122 if there is one, but it certainly isn't necessary unless you're looking for a schematic or something like that.

The Leslie 122 is up there with the best sounding Leslie cabinets for organ. While it's hard to distinguish the sound of the organ and the sound of the speaker cabinet, without a doubt you'll need both to get a top quality sound. Having only used the 122 with a Hammond M3 organ, it's hard for me to say how this compares to other Leslie cabinets like the 127. I do know however, that the combination of the M3 and the Leslie 122 is as good sounding of an organ combo as I've used. The Leslie 122 certainly does it's job with the rotating speaker, and is widely recognized as one of the best Leslie speaker cabinets out there.

I can't say that I've used a better Leslie speaker cabinet than the 122, as it's pretty much the perfect Leslie cab. I don't know if there are any major differences between the 122 and other popular Leslie models, but the 122 seems to be as complete of a Leslie as you can get. I do wish that I could try it with another Hammond organ to get a comparison with the M3, but either way it's clear that this is as good of a Leslie cabinet as there is.
La Leslie 122 est une enceinte qui doit être utilisé avec un organe. Plus précisément, j'ai utilisé l'enceinte Leslie 122 tournant avec un orgue Hammond M3. Il ne sont pas très nombreuses caractéristiques de la 122 que je connais, car c'est un assez simple Leslie Président du cabinet. Vous ne pouvez le connecter à un organe, comme il n'a pas de préampli pour soutenir autre chose, mais vous pouvez certainement obtenir ce modded de l'utiliser avec une guitare électrique ...