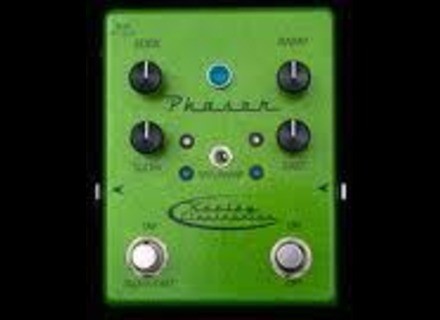 Keeley Electronics Phaser
5
Afficher la traduction automatique
Afficher l'avis original
If you're looking for that classic Phase 90 style phaser, you should look elsewhere. This is for people who love that phase effect and want something a bit more extreme. Slightly different. This is a 6 stage phaser will all kinds of crazy controls to help dial in everything from subtle to wacky. It's great for everything from the subtle phase on leads to the crazy phase on those old school 70s tunes. The pedal features edge, ramp, slow and fast knobs, tap footswitch setting and a mini switch to select between fast or ramp.

For all the stuff shoved in here, it's not bad, space wise. I was able to fit this on my board without any issues. The pedal itself kind of reminds me of another phaser out there, but I'll let that go for now. I'm not sure exactly who copied who. The pedal is housed in a very durable housing. It'll be able to withstand all kinds of abuse, including those idiots who climb on stage and spill beer all over your pedalboard. On top of that, it's true bypass, so you don't have to worry about your tone sounding awful when the pedal is switched off. The manuals that Keeley makes are pretty good at explaining things, but I find that messing with the knobs is always the best way to learn.

The phaser is awesome. Seriously. While it doesn't exactly get that classic Phase 90 sound, it can get a super subtle sound, a crazy warbly sound and everything in between. The tap feature is great when you need to sync it to your song, and the different settings you can choose from thanks to the knobs allow you to dial in the exact kind of phaser you're looking for. This takes a bit of time to sit down with and fully understand how all the knobs work; after all, we're used to just seeing phasers with a single knob. However, once you get used to it, it's super simple to use.

Keeley Electronics Phaser
5
Afficher la traduction automatique
Afficher l'avis original
The Robert Keeley Electronics Phaser is an analog effects pedal that is suitable for any electric instrument, but that I've got experience using in the recording studio for recording electric guitar. It's got standard characteristics in terms of the basics, consisting of 1/4" connections for input and output and requiring nine volt power from a power supply. It isn't rack mountable in any way as it is a stomp box.

Using the Robert Keeley Electronics Phaser isn't as easy as using an MXR Phase 90, but it still isn't difficult. It does have a good amount of control available over your sound, as I find it to be quite versatile in terms of the different sounds that it is capable of getting. The pedal has got parameters for edge, ramp, slow, fast, and a switch for tap tempo/ramp to choose from. There are then two buttons - one for tap tempo or slow/fast depending on how you set the tempo/ramp switch, and one to engage the effect. While these aren't your typically named parameters for a phaser pedal, after some brief use I was able to see that it is pretty easy to figure out how to use.

The tone quality of the Robert Keeley Electronics Phaser is simply outstanding. It's absolutely up there with the best phaser pedals that I've used, even though I don't have as much experience with this one as I do others. I've used the pedal for only a single recording session where I was the engineer and not the player. I don't remember what kind of guitar he was using, but we were sending the signal to a '65 Fender Deluxe Reverb amp and then to a Neve 8108 console. This was a very good judge of how the pedal sounds, as this chain I knew before hand was a very good sounding one. It's possible to get a wide array of tones with this pedal, but I like it best for getting that subtle phasing effect that you almost don't know is there until you listen closely...

While Robert Keeley Electronics is mostly known for doing modifications, they do have a rather impressive line of their own pedals that includes this Phaser pedal. It definitely isn't a cheap phaser pedal when compared to other pedals out there, but that's the price you're going to pay for a handmade, top tier phaser pedal like this one. Because of this high price I can't say that I would recommend it to everyone looking for a phaser pedal, but if you're at a professional or semi-professional level and are looking for a top end phaser to use a lot, the Keeley Electronics Phaser needs to be in the conversation.
Le Robert Keeley Electronics Phaser est une pédale d'effets analogiques qui convient à tout instrument électrique, mais que j'ai l'expérience en utilisant dans le studio d'enregistrement pour enregistrer la guitare électrique. Il possède les caractéristiques standards en termes de bases, composée de 1 / 4 "connexions d'entrée et de sortie et nécessitant neuf volts à partir d'une alimentation. Il n'est pas montable en rack de quelque manière que ce soit une boîte Stomp.

Keeley Electronics Phaser
5
Afficher la traduction automatique
Afficher l'avis original
Keeley is a famous pedal maker from Oklahoma. He started making pedals 10 years ago and put himself on the map by modding pedals and making his own. His original pedals have been used by many famous people like Steve Vai and Brad Paisley. He now has a Phaser pedal on the market. The Keeley Electronics Phaser has a 6 stage phase shifter. This phase shifter has an analog circuit based on OTA ICs (Operational Transconductance Amplifier Integrated Circuits). OTA-style phasers are known for their shimmery characteristics and lush sound. This pedal has two modes. It has a tap tempo foot switch and the normal on and off mode controls a Leslie cabinet style ramp mode of phaser effect. The speed on this mode is fully adjustable. When using Ramp mode, the second footswitch changes between fast and slow speeds. Users can either switch between two speeds instantly, or have the phaser gradually go between the two speeds. Ramp mode emulates the brake on a Leslie in terms of the phase speeding up and slowing down. There are four knobs. These knobs are the edge and ramp knobs with the slow and fast knobs below them. There is a mini toggle that lets you choose between tap and ramp. There is an on and off indicator LED and a 9v power supply with your inputs and outputs.

The pedal is true bypass like every pedal should be. True bypass means the pedal will not color your tone if you dont want it to. The case is made of strong metal as any good pedal is. It is a sparkly black color. You can get it in other colors like sparkly green and silver and blue. Keeley being a boutique maker can probably make any custom color or livery you would like. The switches are the normal switches that everyone uses so they are time tested and durable.

When you tap the tap tempo switch twice you get a tempo going. The phase effect will come in and out with that tempo. The tempo can be as slow as you want if you are playing some crazy SUNN O))) stuff. The phase effect sounds really good and it is very lush and saturated. The edge knob acts as a bit of an envelope filter and it changes where the signal hits the hardest in the sound. Ramp mode lets use you the knobs to change the speed so you can get a more exacting speed on the effect.