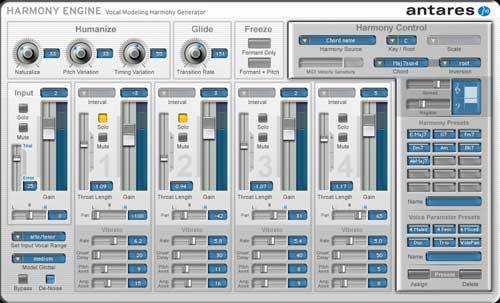 The manual provided by Antares was quite good , it covered in details the building of the harmony , the different effects and panning options to achieve a more natural harmonic sound.

The general configuration and setup is quite simple , this program is very easy to install and to start use it right away.

The typical functions are easily accessible because you have only a simple window to choose different type of voicing , choirs and effects.

The software works correctly in this configuration , the gear is very stable and I haven't had a bad time using it.

I'm getting good performances in building certain harmony effects , in creating different choir effects and many other cool features of this program.

I've been using this harmony engine for about 6 months , but believe me , this is a very powerful musical tool.

What I like most about it are the choir effects , I like how smooth they blend it with the rest of the recording , I also do like some features from Autotune like humanize and naturalize the vibrato and texture of the voice.

Another great feature is the harmony control where you can adjust the scale , the type of scale and the way the voices will interact.

My opinion about the value for the price is great, I think this is a very powerful tools that deserves the money if you need a plugin like this.

Precision and quality of the sound is quite good , however if the voices are very high they do tend to sound very robotic so keep that in mind if you're quite extreme with your harmonies.

Knowing What I know , I would get this program again , mainly because of how useful and fast it is , and I also do like the fact that is doesn't require a lot of cpu power.
Il n'y avait pas n'importe quel type de problèmes de compatibilité principalement parce que ce programme fonctionne sur n'importe quelle plateforme de Windows XP, Windows Seven ou Mac OS.

(contenu en anglais)
Afficher la traduction automatique
Afficher l'avis original
Installing the Antares Systems Harmony Engine plug-in was a quick process and was one without any problems or compatibility issues at all. I had the plug-in up and running in only a couple of minutes from the time that I began to install it. The interface of the software is somewhat complex as there is a lot going on, but after playing around with it a little I was able to figure it out rather quickly. This plug-in has the capability to add four different harmony parts above your original signal, with four separate sections for each of these. Each has parameters for pan, rate, onset delay, pitch amount, and amp amount. It also has an input section as well as a harmony control section and a variety of harmony presets. It also has a humanize section as well as a few other various controls, so as you can see there is a lot of different controls to insure that you will have total control over your sound. I don't have the manual for the Antares Harmony Engine, but its probably a good idea to have it around as this is a complex plug-in.

I am currently running the Antares Harmony Engine on a Mac Book Pro that has a 2.2 Ghz Intel Core 2 Duo processor and 4 GB of RAM. I run Pro Tools LE 7.4 off of a Digi 002R audio interface and I've never had a problem using this plug-in with this configuration. While I never use more than one at a time really, it has never overloaded or acted up while using it, and while I can't say how well it would run if you want to run a bunch of them at once, I imagine that most people aren't doing that anyway.