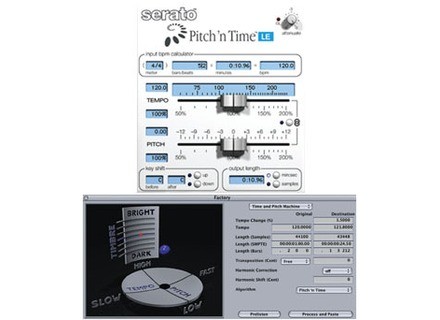 Serato Pitch 'n Time LE
5
Afficher la traduction automatique
Afficher l'avis original
Serato Pitch 'N Time LE is a pitch shifting and time stretching plug-in designed for Pro Tools LE. I didn't have a problem installing the plug-in at all, as the process was simple and straight forward. The interface of the software is generally user friendly, even though there is a good amount of parameters to work with. First, there is a section for inputting the bpm information, including those for inputting the time signature (meter), the number of bars and beats, the number of minutes, and the beats per minute. Below this you will set how you would like to change the tempo, with a large sliders to choose the percentage of change you'd like. You pretty much have the same thing for setting your new pitch, but there is also a section for setting the key if you'd like to modulate it. If you're new to plug-ins out this nature, I'd recommend having the manual around, but I haven't seen it so I can't say too much about it's make up.

I'm running the Serato Pitch 'N Time LE plug-in on a Mac Book Pro that has a 2.2 Ghz Intel Core 2 Duo processor and 4 GB of RAM. The version of Pro Tools LE that I run is 7.4 and I run it with a Digi 002R audio interface or a Digidesign Mbox Micro depending on where I am working from. The plug-in doesn't seem to take up too much processing power, but this isn't the type of plug-in that I use too much - I will only use one at a time within a session, and then I'll print the track and move on to the next thing. As long as you use it like this as well, which is really how it should be used, you won't have any problems in terms of performance with this plug-in.