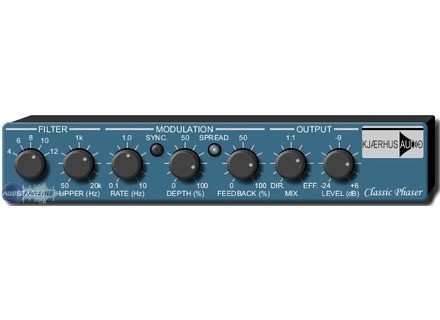 Kjaerhus Audio Classic Phaser [Freeware]
4
Afficher la traduction automatique
Afficher l'avis original
The Kjaerhus Audio Classic Phaser is a free plug-in that is only compatible on PCs and as a VST plug-in. I don't run this plug-in in my current system, as I could not keep it on when I changed from a PC to Mac. I honestly can't remember too much about the installation process of this plug-in in particular, but the Kajerhus Audio plug-ins should all be very simple to install as the process of the other ones is not out of the ordinary. The make up of the Classic Phaser includes sections for filtering, modulation, and output. The filter section has parameters for filter stages and upper (frequency), while the modulation has those for rate, depth, and feedback. The output section simply has parameters for level and mix, which seems to be standard with a lot of the Kjaerhus Audio plug-ins. I don't believe that a manual was made for this plug-in, and most user shouldn't need one anyway.

Before I switched my system from Cubase to Pro Tools, I was running the Kjaerhus Audio Classic Phaser plug-in on a Hewlett Packard Pavilion dv8000 lap top with 2 GB of RAM and a 3.0 Ghz processor. I ran everything through a MOTU 896 HD audio interface. I generally have had no problems at all with performance of the Kjaerhus Audio plug-ins, and there is no exception with the Classic Phaser. It clearly doesn't take up much processing power, but I doubt that most users will need to run too many of these simultaneously anyway. Everybody's system is different, so to get a real idea of how well this plug-in will run on your system, I'd recommend just trying it out for yourself being that it's free.