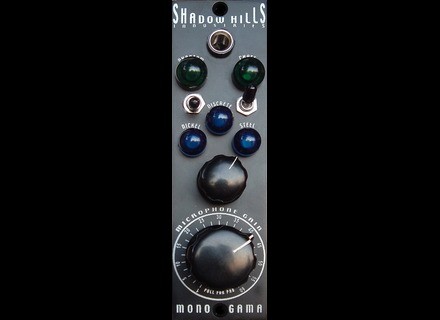 Rapport qualité/prix : Excellent
Voir les autres avis sur ce produit :
Afficher la traduction automatique
Afficher l'avis original
The Shadow Hills Industries Mono GAMA Mic Pre is a 500 series module for your recording studio. About a month ago I had the pleasure of using a set of these at a studio I often work at - he just recently got them in. These will only work within a 500 series casing as they won't be able to stand on their own. It's only rackable in one of these casings.

The configuration of the Shadow Hills Industries GAMA Mic Pre isn't complicated but it does have a lot of options for you to work with, which for me is always something that I enjoy. In addition to microphone gain control, phantom power, polarity, and a -20 db pad, it has a three mode parameter that allows you to choose between three different transformers for slightly different tones, as is found on other Shadow Hills mic preamps. The GAMA Mic Pre also has a 1/4" input for going direct.

The sound of the Shadow Hills Industries GAMA Mic Pre is amazing. I've had the chance to use these preamps for a few different applications, but only for one session. I started off using them for drum overheads but then also used them for a bit of Hammond organ and vocals, which they excelled on. I'm going back to the same studio again soon, so I hope to try them out for other applications.

The Shadow Hills Industries GAMA Mic Pres are the perfect addition to any 500 series rack. They're excellent mic preamps with a lot of control and headroom. While not cheap, I was surprised to see what they cost as I thought they would be at least $1,000 US dollars as they are closer to $800 a pop. If you have a 500 series casing that you're looking to expand, I would give these a try!
Le Shadow Hills Industries Mono GAMA Mic Pre est un module de la série 500 pour votre studio d'enregistrement. Il ya un mois, j'ai eu le plaisir d'en utiliser quelques uns à un studio ou je travaille souvent au - ils vennaient juste de les recevoir. Ils fonctionnent uniquement dans un rack au format 500 API car ils ne fonctionneront pas indépendamment. C'est seulement rackable dans un de ces rack.