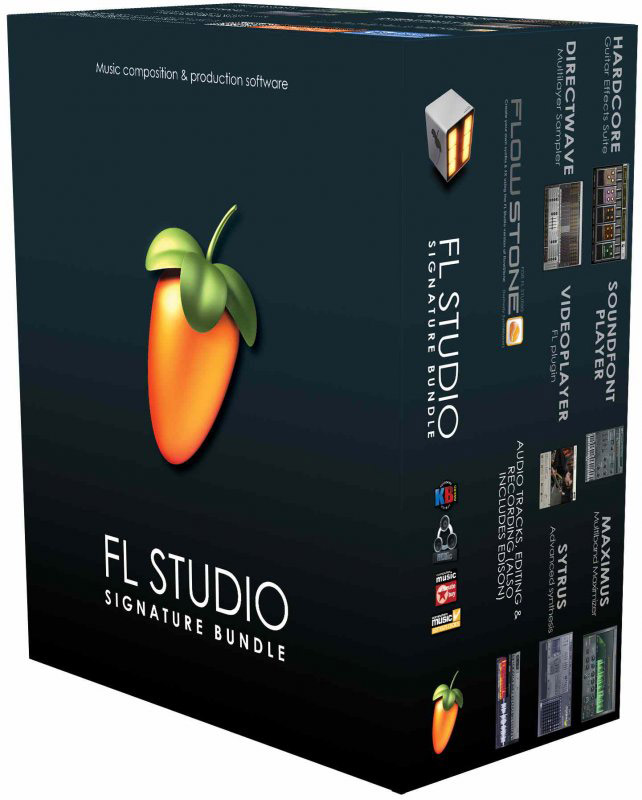 (contenu en anglais)
Afficher la traduction automatique
Afficher l'avis original
FL Studio 11 XXL Signature Bundle is the most complete FL Studio package you can get. It contains all the FL Studio features with no restrictions and costs $299. If you already own the signature bundle from previous versions then you can get 11 for free. You can use it for sequencing, recording, mixing, mastering, programming drums, inputting MIDI data, etc. It's a loop-based DAW.
It supports MIDI input and can be used with various hardware devices including keyboards, drum pads and other devices such as the Maschine.

It also comes with a comprehensive user manual which explains almost every aspect of the GUI including some basics in electronic music. I actually learned how to use FL mostly from the user manual itself which speaks volumes on its clarity.

If you're familiar with the FL Studio family then there are no major changes in this edition and you can get to work really fast as I did. But if your new to the DAW it may take some time to get used to because it is an unconventional DAW.

The installation process is easy. During setup you're prompted to install the ASIO4LL driver which is a must if you want to use FL Studio to record. It doesn't allow you record using any other driver except ASIO which can be frustrating at times. You're also given the option to install it as a Rewire device for use in other DAWs.

I run FL 11 on 2 physical Windows 7 machines and 1 virtual Windows XP machine with no major issues. The main problem I come across is instability of the software. It crashes at random times so it's important to save regularly otherwise you risk losing your work.

I've used FL Studio for 10 years and it's still my main DAW to this day. When it comes to getting out ideas really fast nothing beats FL Studio once you've gotten used to the workflow. It may take some time to get used to for newbies or those who are used to traditional DAWs like Protools, Cubase or Studio One. The workflow is unique, but can be very effective once you find your way around it. I often get a complete beat done in 20 - 60 minutes on FL.

I use it with a Native Instruments Komplete 6, Avid Mbox 3 Mini, Akai MPK Mini MIDI controller and occasionally with other gear. I haven't experienced any notable performance issues with that hardware. FL runs primarily on Windows although it's possible to run it on Mac using Darwine.

One great thing about FL Studio is that you can make music using just your computer keyboard and mouse, a MIDI controller is not necessary, though it does make things easier. Few DAWs can compete with the way FL implements this feature. The step sequencer is great for programming drums. It also has the most feature-rich piano roll that I've seen. It has a lot of handy features such as strumming, quantization, arpeggiation, exporting to score, legato, articulation, randomization, chopping and various other features which make editing MIDI data quicker. I've used REAPER, Ableton Live, Studio One, Cubase, Mu-Lab, Orion and Reason; none of them has a piano roll as feature-rich as FL Studio.

Another great thing about FL is its MIDI handling capabilities. It supports various devices and it's very flexible. Setting up a MIDI controller is quick and easy. I use it with my AKAI MPK Mini and it works great.

When it comes to recording instruments and vocals I've found FL Studio to be a bit frustrating. For one you can't use any other driver except ASIO for recording, which is very limiting if you have other drivers that you wish to use. Another issue is that you can't see the wave form until you're done recording so monitoring visually is impossible during recording.

The playlist can be polarizing. The traditional FL Studio playlist which had pattern blocks has been phased out in this version. So anyone who heavily relies on that may find the new playlist frustrating. I for one took quite some time to get used to the new workflow. I've had to use workarounds to get a similar feel to older versions by locking all patterns to one playlist track. It's not the same as before but it gets the job done. I'd prefer to have the old blocks back though.

One of its strongest selling points are the plugins it comes bundled with. From the generators my favourite are Harmour and Sytrus. Those 2 plugins alone can create almost any sound. From the effects side you get some great plugins like Maximus (a mastering plugin), Fruity Convolver (a convolution reverb), Hardcore (a guitar stomp-box) and the Fruity Parametric EQ 2 which I use in almost every track. With FL I'm really spoilt for choice and rarely have to use external plugins because the default ones are great.

All in all FL Studio is a great DAW. Of all the DAWs that I've used it's the easiest to use only with a mouse and computer keyboard. It comes packed with basically every feature that you'll require to compose, record, mix and master a complete song or album.
The pros and cons are:

Pros:
- Self-contained DAW which has almost everything needed to compose, record, mix and master a song. It comes packed with a tonne of effects, synthesizers and samples.
- Feature-rich Piano Roll
- Great live performance features. Probably second only to Ableton Live
- Easy to use with only a mouse and keyboard
- Flexible for use with MIDI data
- Lifetime free updates. Once you buy it you get all future updates at no cost


Cons:
- Recording module is not very flexible.
- Unconventional GUI (steep learning curve if you're used to more conventional DAWs like Cubase, Protools, REAPER, etc)
- Limited number of mixer tracks and playlist tracks. For most projects this is not a big deal but for huge projects this can be quite frustrating.
- Constant crashes. The DAW is very unstable especially with some external plugins
- Recording is only supported using the ASIO driver
- No 64 bit version available


I would buy this DAW without a second thought. It's an excellent DAW especially for composing beats. Its vocal recording functions are not as flexible as many other DAWs out there, but it gets the job done. If you're going to do heavy work with recording and processing of vocals then FL is not the right DAW to use. But for almost all other intents and purposes it works great. The value for money is great. You can get everything except the kitchen sink with this DAW. You don't have to buy extra VST effects or instruments because it comes bundled with basically everything; samplers, a soundfont player, synthesizers (FM, Wavetable, Subtractive, Additive, etc), effects (reverb, EQ, compressors, a maximizer, flangers, etc). Considering everything that's packaged it's a bargain. It's particularly good for hip hop and dance music.