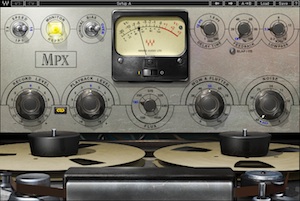 (contenu en anglais)
Afficher la traduction automatique
Afficher l'avis original
Kramer MPX Master Tape is a plug-in from Waves to be used inside a DAW. The software is easy to install and authorize. There are only a few controls, but they aren't immediately intuitive when you first try out the plug-in.

Tape Hiss/Noise can be mixed in at different volumes. Wow & Flutter is also variable, which can be added in subtly or with extreme settings. I've found in practice I always turn off the noise and wow & flutter.

The main function of the plug-in to add glue/saturation to your tracks is controlled by the input level and the 'flux'. I read an interview on the Waves website that suggested using the input dial so the signal is peaking at 0 on the VU meter. This was typical of how the level was set on real tape machines back in the day. Then it was suggested to crank up the flux to achieve the desired glue/saturation.

In my opinion, turning up the input dial so that the signal is peaking well above 0 on the VU meter can achieve good tape saturation as well. Its all up to you to experiment with.

I usually use the 15'' tape speed because it doesn't color the sound to much. The 7.5'' setting adds some boost to the low-end and rolls off some of the top-end. Occasionally, this can be useful - like on a drum bus or to tame the top-end of distorted electric guitars.

Tape saturation/compression effects are useful as a cumulative effect across all your tracks - on every track, and on your mix-down bus. Kramer MPX is a good tool to take off the digital edge/sharpness of recording in the box (ITB).