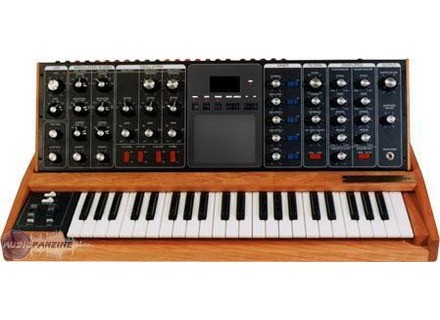 Moog Music Minimoog Voyager Performer Edition
5
Afficher la traduction automatique
Afficher l'avis original
This synth is an analog monophonic synthesizer, which is today's version of the 1970 classic Minimoog. Back in the 1950s and 60s, the only synthesizers were known as 'modules,' which were huge walls of knobs, switches, cables, etc. Modules were very rare instruments, and only very complex recording studios had them, and some T.V. Commercial music creators used them. Bob Moog was clever enough to take all of the capabilities of modules, and put it into a small, compact box known as the Minimoog. The Minimoog was the first affordable synthesizer to the general public. The overall look of the instrument is simply stunning.

I love how the user is 100% in control. If I can think of a sound, chances are, I can create that on a Moog, or at least get extremely close. All of the knobs and switches are at your fingertips, and are ready at all times for even the slightest edits. Everything in the instrument is analog, which means real electrical circuits produce the sound, not a sound chip producing sound from a memory card like most keyboards. The Minimoog is the real deal.

The sounds are simply amazing. From hollow triangle and square waves, to raspy, 'in your face' sounds like the sawtooth and pulse, the Minimoog Voyager produces very unique, vintage sounds. The oscillators are stable, reliable to stay in tune, and produce simply a magical tone that no other synth can ever replicate.

Moog Music Minimoog Voyager Performer Edition
5
Afficher la traduction automatique
Afficher l'avis original
This is an analog synthesizer, made by one of the greatest and most respected companies to make analog synths, Moog. It has three octaves and multiple controls including 896 preset sounds. It is also quite easy to manipulate and change the sounds, as well as save them, without losing the original sound. The synth has a unique (at least for me) feature called Pot Mapping, which will allow you to designate the mod wheel to affect multiple controls at once. Thus, by turning the wheel, you can control waveform, modulation, oscillation all at once. There is a maximum of three effects that can be designated to pot mapping. Another really cool feature is the ability to save the presets as well as your custom settings to a computer to recall them quickly and easily. I believe this is one of the reasons why this model is referred to as the Performer edition. It's monophonic, which is frustrating to those who prefer the polyphonic Moogs, but it's versatile in its own way, especially with the range of sounds. There are a few different connections, the computer one I mentioned earlier, also a midi and regular audio connection.

For me, a natural guitarist and bassist, fumbling through presets is always a bit of a hassle. With so many presets, this unit did initially frustrate the hell out of me. However, any person used to this probably wouldn't feel too bad about it. Plus, I definitely got used to it with practice. The Pot Mapping feature especially is incredibly efficient once you get used to setting it. The setup isn't too hard, it doesn't get too heavy into the software or hardware. The manual explained everything pretty clearly, unless you aren't familiar with some of the terms. With the internet's use, however, everything can eventually be understood.

The sounds in this analog synth aren't "realistic", but they are quite nice. Beautiful even, at times. They are monophonic, which is limiting to some players, probably keyboardists or pianists, but for me, they work just fine. I usually am only looking for large pads, huge bass notes, and smooth lead lines, either in mid or high registers. Almost all of the sounds are perfect for these uses. With 2 Modulation busses, 1 Low Frequency Oscilator, 3 oscilators, 2 filters (highpass/low pass or dualing lowpass) a filter envelope and a volume envelope, there isn't a whole lot you can't do with this guy. I tend to experiment and record with it on the fly, so I can't name a preset that I really like, but the sounds work great for a wide variety of styles of music. I mostly try to imitate dance-rock groups like Justice and Daft Punk with it, but I've had great sounds that have emulated the Cars, The Police, and many others. The sounds can get anywhere from really polished to grainy and dirty (which sounds amazing to me). With so many options, there's bound to be sounds that aren't as good, but they can be avoided and programmed out with ease.