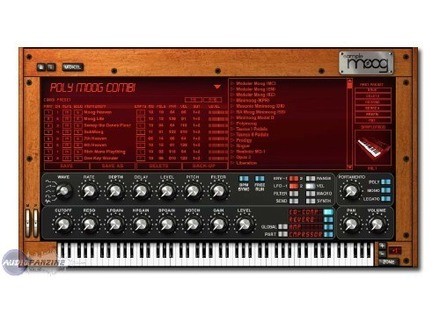 IK Multimedia SampleMoog
4
Afficher la traduction automatique
Afficher l'avis original
IK Multimedia SampleMoog only cost 99 dollars and can be downloaded right after your purchase. It is very easy to install and set up, it will only take a few minutes and you will be able to load it up in your computer and start using it right away. There are some really good sounds on the SampleMoog, with a collection of sounds from the Moogs over the years. There are over 2000 sounds from all of the most rare and best Moogs in history, they are all accurate sounds to they real thing. Now there is nothing like a real Moog and if you are looking for a real Moog sound and feel then you will need to go out and buy a real one. But the SampleMoog by IK Multimedia will get you pretty close to it.

The layout of the IK Multimedia SampleMoog could be a little better or maybe if they offered some more skins for it. The color of the text and the text box where you pick your patches clashes pretty bad to me and it was not easy on my eyes. I wish there was a way to change it, I love how everything else looks and with the wood grain look it adds a lot of character to the VST. All of the parameters are easily changed and edited on the main screen of the IK Multimedia SampleMoog.

For the price, you have nothing to lose. You will get some classic replications of the original Moogs and be able to change them and add effects to them in real time. If you want to add some flavor to your sounds then purchasing this is a good idea or if you just are a classic Moog lover and want it all in the software format then you will need to make this investment. But if you are looking for a real Moog, get a real Moog.

IK Multimedia SampleMoog
5
Afficher la traduction automatique
Afficher l'avis original
There were no compatibility issues using this in Logic 9, Ableton 8 and as a standalone unit.  I did not need to reference the manual as IK Multimedia's synth plugins all run off the same style interface, so every thing is in the same place as the first one that I learned how to use.  Overall, the setup and configuration is fairly simple.  There was one thing that was a little difficult to figure out.  It was setting the midi channel for each layer of a patch, but after referencing the manual in the first IK multimedia plugin, it was no problem.   Yes, all the functions are easily accessible via different "view" selection knobs.

I use a Macbook with the earlier mentioned DAW's and it works perfectly.  It also runs great as a Stand alone unit but I don't really use it that way much.  So far, Samplemoog hasn't crashed or lost any presets.  I give this thing a 10 out of 10 for performance.  It works great with all of my midi controllers and the ability to layer a bunch of sounds on top of each other can let you create some absolutely amazing sounds.  I have been using this plugin for about a month.

There are a bunch of things I really like about this unit.  The layering which I mentioned earlier is one of the best.  Mainly though, the huge collection of so many awesome Moog machines in one plugin in is the best part.  I was really pleased to see some very fun Theramin patches but mainly I was really excited to see they put the Little Phatty in there too.  I wish I could buy the real thing, but this will do nicely until I can afford it.  I can't say there is anything I don't like about this plugin.  Its not as good as the real instruments, buts it pretty dang good  (at least compared to the Moog's I have heard in person) for sounds coming out of my Computer.  My studio partner and I paid around $200 together for this unit.  Its a decent size chunk of money, but its worth it to have all those quality sounds in our arsenal.  I give it a 9 out of 10 for precision and quality of the sound.  It's impossible to get the true analog heaven that comes out of a moog unit to come out of anything digital.  I use Arturia's Minimoog and Voyager plugins which are also really awesome, but this one beats those just because of the more instruments.  Yes, I would definitely make the same choice again.
Il y avait des problèmes de compatibilité à l'utiliser dans Logic 9, Ableton Live 8 et comme une unité autonome. Je n'ai pas eu besoin de faire référence au manuel sous forme de plugins synthé IK Multimedia tous les ruissellement de l'interface même style, donc tout est dans le même endroit que le premier que j'ai appris à utiliser. Globalement, l'installation et la configuration est assez simple. Il y avait une chose qui était un peu difficile à comprendre. Il était le réglage du canal MIDI pour chaque couche d'un patch, mais après le référencement manuel dans le premier plugin d'IK Multimedia, ce n'était pas un problème. Oui, toutes les fonctions sont facilement accessibles via différents boutons «vue» de sélection.