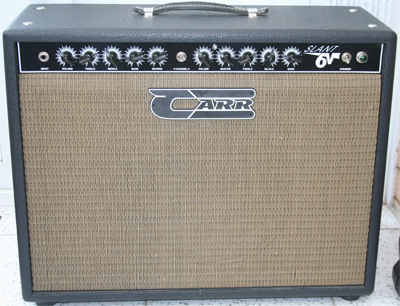 (contenu en anglais)
Afficher la traduction automatique
Afficher l'avis original
Like all Carr amps, the Slant6V is a fully handwired, point-to-point tube amp that is build to a very high standard. So basically, you get the best of the best build coupled with a bunch of great features. For tubes, the amp runs on 6v6 power tubes, a tube rectifier and a couple of 12aX7 and 12aT7 preamp tubes. I owned the high powered version so it was always running at 40w (and a SS rectifier), normally there’s a switch that lets you take it down to 22w or 18w. This will lower the headroom and increase the gain. You have 2 fully independent channels with their own EQ, reverb and volume controls. The OD-channel also has a boost control. It comes with a footswitch that toggles the channels and boost on ch2.

As each channel has its dedicated set of controls, it is very easy to setup the amp. The footswitch works great, the FX loop however responded weird sometimes, it didn’t seem to get along with all fx units that I tried. As it has no overall master, I had some problems balancing the volumes of the 2 channels at 1st but after some time it was ok.

I sold the amp because the gain channel wasn’t ‘there’ for me. It sounded good but I was always struggling with it. The being said, I should have kept this amp just for the clean channel. I love 6v6-clean tones and the Slant6V delivered them in spades. It had, by far, the best clean tone I have ever heard. What’s more, it took pedals very well. The OD channel wasn’t as easy. I experimented with tubes and speakers but something was missing. Often it would be to dark and smooth sounding and disappear completely in the mix, then it would be to gritty. Someday I will have to give the normal version a try to see if the tube rectifier and low wattage option changes my opinion.