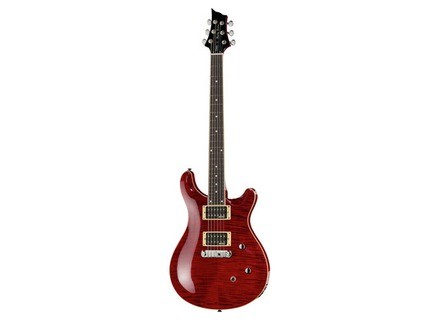 L'avis de M.Hyde"Needs a lot of work before being playable"

Harley Benton CST-24
2
Disclaimer : despite the poor note and harsh review, I decided to keep this little guitar because it looks cool and feels nice to play after some work on the frets and neck

So, I ordered two of these to be sure I could choose the one I prefered between them. Right out of the box they were both bad, like barely playable at all.
It was interesting comparing both of them though, and I'm pretty sure either they we made on different factories or the consistency of the build is non existent. Here are the main differences I found :
- The fretboard was made from two completely different woods : the one I kept has a nice dark fretboard (that was completely dry, so I had to hydrate it), the other one had a horrible orange fretboard that matched horribly with the black body
- The necks were completely different in shape : the one I kept is more of medium D shape, the other one was more of a skinny shape
- The one with the orange fretboard was way heavier, the one I kept is pretty light
- The one I kept projects a little less unplugged, but the difference is small

Now why the bad review ? Here are thye negative points :
1) The fretboard job was awful on both of these, the action was VERY high and it was impossible to get it lower because there were many high frets which would generate buzzing in many places on the neck.

On the one I decided to keep I filed many frets to get them more level and a decent action : not very low but definitely playable. Also, I dont feel the frets sticking out on the sides of the fertboard, which is good.

2) The pickups are pretty dark, and felt very weak when the guitar arrived. I raised them and it definitely gave them more punch making them better fitted for my style of music (heavy stuff) : adjusting the height is definitely an easy trick to get the pickups sounding better. I will definitely change them in the future.

3) The split is completely useless : it sounds weak and dark

4) The neck seems to be quite soft : the neck bends work really well, but I'm not sure it's a good thing. Also, the neck gets flatter when you take off the tension on the strings, so beware if you're making fret adjustments

Neutral points :
1) The finish is alright, it's not really good, it has some splatches of paint on the binding, but for the price it's defintely OK

2) The tuners were bad when the guitar arrived, but after using them a bit they became more smooth and the guitar stays in tune fine

Finally, the positive points and why I decided to keep it :
1) It looks really cool : it's funny because I wanted a black PRS with the nice carve and binding, and it's actually almost impossible to find ! I was really glad when I found this little baby that fitted exactly what I was looking for !

2) Not counting the fret job, it's actually comfortable to play : it's slimmer than my LP, and lighter too, the neck feels good and not too thin, it has some meat to it which is good. It's a little neck heavy, but wth a good strap it stays in place alright

3) It's cheap so I can actually experiment on it with no worries, especially on the setup and fret leveling parts (I still would recommend doing heavier stuff with a real tech, but I like to tweak a little bit myself)

As a conclusion, I'd say stay away from this guitar if you're looking for something that's great to play right out of the box, since the fret job was very bad on both of the ones I got. I would not recommend this one to a beginner. If you're OK with taking it to a local tech to make a good setup, then it's a pretty attaching little guitar.
Also, I could have been purely unlucky by getting two bad models, so there's that. In the end I still decided to keep one of them, so it's not that bad